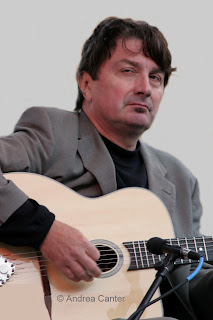 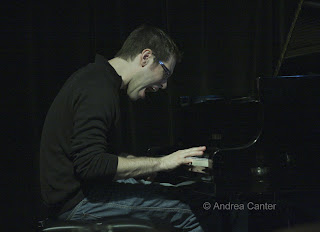 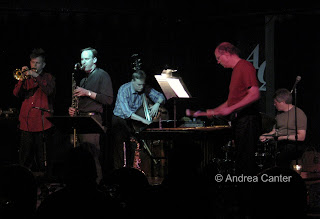 © Andrea Canter
Jazz takes no holidays. There’s as much going on around town this weekend as ever and calendars get more crowded as the week goes on.

Wish I was in town Saturday night (4/11) when three favorites get together at the Artists Quarter for some sonic mayhem—pianist Bryan Nichols, bassist Adam Linz, and drummer Phil Hey. They each have the capacity to incite a musical riot—so what will happen when they get together? Somebody, tell me about it!

If you are on the west side of the metro Saturday night, check the action at the 318 in Wayzata, where swing and bop guitar whiz Reynold Philipsek and his East Side quartet--Clint Hoover (chromatic harmonica), Matt Senjem (acoustic bass) and Michael Bissonnette (percussion)--celebrate their debut CD release. This is an opportunity to hear Philipsek outside of this Twin Cities Hot Club persona.

Living legend guitarist John Scofield comes to town with another band, this one blending blues, gospel and modern jazz, aptly named the Piety Street Band. At the Dakota on Easter Sunday night, of course! Things will take a more swinging and sassy turn on Monday night (4/13) when Christine Rosholt returns to the Dakota. Her band is always turned up to boil.

Continuing with more guitar, West African innovator Lionel Loueke arrives for one night at the Dakota on Tuesday (4/14). Who is Lionel Loueke? Herbie Hancock’s preferred guitarist at the moment, as well as a frequent cohort of Terence Blanchard. They didn’t sell guitar strings in his native Benin so he learned to improvise at an early age on many levels. He also absorbed African traditional music and American rock and bop, stirred it up with classical training in the Ivory Coast before heading first to Paris, and then to Boston (Berklee) to hone his jazz chops. Now it all comes together in a global mix of voice and guitar, sounding faintly Brazilian with heavy doses of West Africa and American jazz roots.

Valve Meets Slide has been one of the more popular shows at the AQ in the past year. Valve is Brad Bellows on valve trombone, which looks like a trumpet with a goiter..... and slide usually is Dave Graf on slide trombone, but Jeff Rinear makes a great alternative on Wednesday night (4/15).

There’s lots happening on April 16th. If you have not yet heard the young Alternates, a quintet of high school guys on the verge of launching their jazz careers, they take the early set at the Artists Quarter (7 pm). And if you have even a passing interest in the music of Eric Dolphy, or think you should, it’s one of those rare appearances of the Out to Lunch Quintet at MacPhail’s Antonello Hall. Not only a great opportunity to hear Kelly Rossum, Dave Milne, Dave Hagedorn, Tom Lewis and Phil Hey in one ensemble, OTLQ provides an accessible introduction to the odd meters and harmonies of an early avant garde composer through reinterpretations of some of Dolphy’s most memorable compositions as well as original works by band members. It’s interesting to hear and even more intriguing to watch as it unfolds. And if you are in the Winona area, check out the concert at St. Mary’s with band director John Paulson and special guest/clinician David Liebman.

Looking for an excuse to indulge in some great pizza at Fireside in Richfield? You have two excuses this week, as Charmin Michelle sings her usual gig on Monday (4/13), then takes a break, yielding the stage (or the tiny floor area) on Wednesday (4/15)to KBEM’s Corner Jazz host Maryann Sullivan, a rising singer in her own right. Denny Malmberg handles the keys for both. Finish your taxes and order your reward, with pepperoni or mushrooms, or both.

Coming later this month—Bruce Henry back from Chicago at the Dakota (April 17-18); songs that didn’t quite win an Oscar with Arne Fogel, Nancy Harms and Connie Evingson at the Hopkins Center for the Arts on April 18th; tribute to icon Jeanne Arland Peteson at the Capri Theater (April 19); Nachito Herrera and Kelly Rossum at the Dakota on April 20; Jim Rotondi and Rick Germanson at the AQ (April 24-25), singer Robin McKelle’s Dakota debut on April 24-25; the Bad Plus at the Cedar (April 25)... yeah, that’s just the tip of the ice berg.