Framework and the Sight of Sound 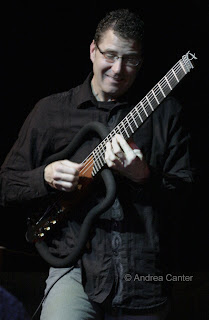 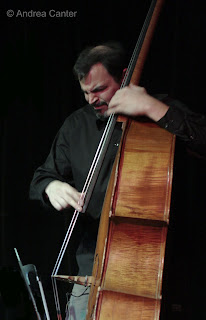 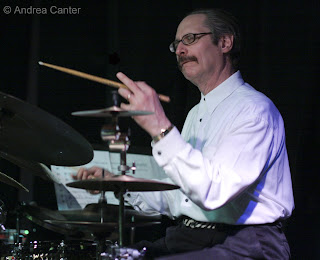 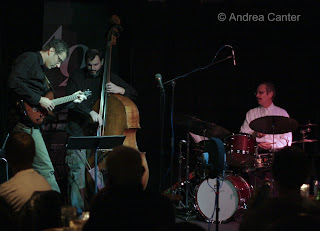 © Andrea Canter
Framework is a jazz trio of relatively long duration—13 years. Over much of that period, however, their public gigs were few and far between. Fortunately, the collaboration of guitarist Chris Olson, bassist Chris Bates and drummer Jay Epstein has been on display more often in the past year or two. Finally, they have a shiny self-titled CD to back-up their live efforts. And it is a very fine recording, one that you can tangentially enjoy in the background or truly appreciate with ears and mind more fully engaged. It’s modern and hip but in a gentle sort of way that won’t provoke unless invited in. (Check out Jazz Police for a more detailed review at http://www.jazzpolice.com/content/view/8233/115/!)

But as so often is the case, the live music transcends the recording. It’s not just the greater intimacy of the live sound in a small club setting like the Artists Quarter, but the visual input makes it all far more enjoyable and understandable--that “ahaha” moment when you are able to connect sound to instrument to musician. Three guitars? No wonder there’s so much variation in those string vibrations and pitches. On the stage at the Artists Quarter last night, you could watch as Chris Olson created and played back a whiney loop—it really wasn’t produced by alien technology.

I always enjoy focusing on Chris Bates’ hands as he alternately caresses and mangles his strings, one moment as gently as I stroke my cat, the next shaking fingers as if seeking relief from arthritic joints, later slicing away with his bow as if making precise surgical incisions, then suddenly transforming it as a weapon of music destruction with all the gentility of a hacksaw.

Take a look at Jay Epstein, who manages to carry out all duties with the grace of a ballet dancer and the power of a bulldog, his ever-evolving arsenal including not only the usual sticks and brushes but also a long tube, small shakers, soft mallets. His face squinches with concentration only to relax a moment later in a big grin.

You can’t infer all of this from a CD—the universe of sounds from a supernova of co-mingling stars. Last night that universe suggested a “best of Hollywood” film soundtrack, as the music seemed well suited to telling every imaginable tale, shimmering with high anxiety, sweet rain, doomsday fear, a summer’s day float. And that was just the first composition.
Photos: Framework's CD Release at the AQ, Top-Bottom: Chris Olson and his "nerf" guitar; Chris Bates; Jay Epstein; the trio. (Photos: Andrea Canter, 4/2/09)
Posted by Canterjazz at 2:07 PM