A Week on the Jazz Planet (aka Club Dakota) 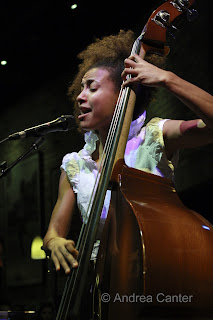 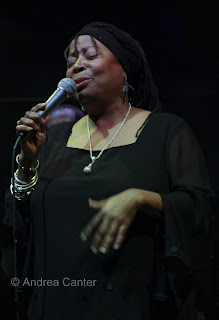 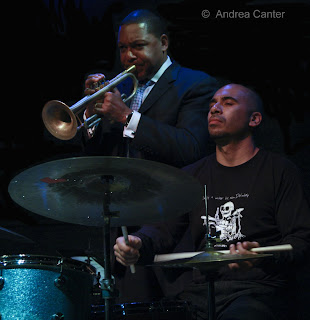 I am quite certain I could not survive the life of a jazz musician, and this is based solely on my state of exhaustion following six consecutive nights at the Dakota Jazz Club in Minneapolis in the audience, not on stage. Even for me, I think that was a record. The waitstaff offered me overnight accommodations. And at least for the past week, I suspect there were enough nightly patrons to create our own jazz dorm. But really, all this jazz has me a bit worn out. And happily so, although I am somewhat relieved to stay home this evening and bask in the glow of jazz nights past.

The delights of the past week were not only in hearing some of the most talented musicians on the national (and local) scene back to back to back, but seeing a jazz club filled, even to the point of standing room only. Dakota owner Lowell Pickett advised us each night that the best way to counter the recession was to go out and hear live music. Apparently that advice was taken to heart and ear, at least on Nicollet Mall. So what did I hear?

March 2­–3, The Joshua Redman Trio. Now that he is over 40, the winner of the 1991 Thelonious Monk Saxophone Competition is not so much a “young lion” as a mature monster, as composer, performer and bandleader. He steered the mythic SF Jazz Collective through its first few years while continuing to build his improvisational chops and character as one of the 21st centuries most engaging writers. Touring with equally impressive if lesser known bassist Reuben Rogers and drummer Gregory Hutchinson, over four sets Redman treated us to swinging interpretations of “The Surrey With the Fringe on Top,” gorgeous balladry on “My Foolish Heart,” and a sheaf of original tunes (e.g., “Insomnomaniac”) that soared far above the modal exercises of much of the contemporary saxophone repertoire. As on his new CD, Compass.

March 4, Claudia Schmidt with the Dean Magraw Quintet. After years on the folk circuit, Prairie Home Companion alum and former Twin Citian Claudia Schmidt gave in to her long-standing jazz yearnings. Over the past few years she has released several recordings of standards and jazz interpretations, culminating in her Live at the Dakota release in 2006 with the Dean Magraw Quintet. She’s returned annually, and each time her jazz sensibilities seem to have moved up another level. This night was the best yet, likely in part due to the growing synchrony between singer and band. Magraw and Schmidt were once-upon-a-time cohorts on PHC, and their rapport is evident throughout live performance. Add to guitar wizard Magraw the likes of pianist Bryan Nichols, bassist Chris Bates, drummer JT Bates and saxophonist Brandon Wozniak, and you have plenty of tinder awaiting ignition. And indeed, there were plenty of sparks as Claudia performed not only tunes from the live recording but bits and pieces from her otherwise diverse repertoire, all given bright jazz and blues interpretations, and often a story or two about the song’s origin. All delightful but what stands out a few nights later—“Chickadee Blues” (based on the “tune” she heard chirped outside her window), “Having a Drink With Jane,” “Frim Fram Sauce,” and the eternal “Skylark.”

March 5, Esperanza Spalding. Esperanza is young enough to be dubbed a “Young Lioness” but that hardly seems sufficient. At 24, the bassist/vocalist is already a veteran performer and faculty instructor at Berklee; her resume includes the talk show circuit and a performance at Obama’s inauguration; her second recording (Esperanza) was on many “best of” lists for 2008. And of all the gigs at the Dakota this week—maybe of all 2009 gigs so far—Esperanza not only sold out the tables and barstools, she sold out what standing room tickets were available. For both sets. Top that off with a show that crackled with energy from the first note, with a stage presence that easily matches or surpasses any veteran, and with a downright excess of musical talent. Vocally she has a mature approach to phrasing and a dare-devil sense of interpretation, capped with bits of Mina Agossi’s elasticity, in three languages (English, Spanish and Portuguese); her bass playing (on acoustic or electric) smacks of the dexterity of a Christian McBride and the power of a Stanley Clarke. Watching her is nearly as exhausting as it is fascinating, as she sways and twists as if body English alone could extract the notes. Maybe it can. Her young cohorts were nearly as impressive, particularly pianist Leo Genovese, and her encore duet with drummer Otis Brown III (playing just snare on the front edge of the stage) was sheer delight.

March 6, Debbie Duncan/Late Night Jam. Honestly I only caught the final 20 minutes of Debbie’s last set and the opening notes of the Bryan Nichols Trio’s late jam, having walked over to the Dakota from Orchestra Hall after an evening with the Jazz at Lincoln Center Orchestra (see March 7th blog). Debbie ran well beyond the usual 11 pm stopping time and no one minded; every moment with Debbie is time well invested. It was clear that there would be a sparkling jam session as most of the JALC musicians began filtering in, instrument cases in hand. They weren’t just there for the menu. I planned to return the next night so opted out of one more late evening. I hear I missed some ferocious playing from trumpeter Sean Jones, among others.

March 7, Kenny Werner Trio with Debbie Duncan. For years, Kenny Werner has been one of my favorite pianists, someone whose exquisite touch and inventive mind yield diverse interpretations and compositions that define post bop elegance. Although recording and touring most often in trio format, he’s also a long-time partner of harmonicist Toots Thielmans and Broadway star Betty Buckley, and has led some highly effective quintet and sextet projects. He is currently touring with a new trio of youngbloods—Jorge Roeder on bass and Richie Barshay on drums. Despite their youth, or perhaps because of it, Werner’s partners offer the perfect complement to the master’s music---if Werner himself took up bass or drums, he would be Roeder or Barshay. One of Werner’s trademarks is his use of pianissimo and open spaces, two traits his cohorts shared with patient reverence. As did the audience, the most attentive Saturday night crowd I have ever experienced at the Dakota. Among a bagful of gems were Werner’s interpretation of Bach’s “Sicilienne” (my personal favorite of Werner’s book), Horace Silver’s “Peace” and Kenny’s “Beauty Secrets.” But the two sets were not limited to the Kenny Werner Trio. Vocalist Debbie Duncan (whose Saturday night gig was bumped when Werner was available for just one night) joined the ensemble for two tunes each set, and as marvelous as she is on any given night, she was simple stunning with Werner, particularly in rendering Jon Hendricks lyrics on “‘Round Midnight.” Werner seemed well aware that this local musician was of national caliber.

March 7, Late Night Jam. This time, there was no leaving. As the Kenny Werner Trio packed up, Bryan Nichols, Adam Linz and JT Bates assembled on stage, the anticipation electric. If no one showed up to jam tonight, we would nevertheless be treated to insanely powerful and provocative music from these musicians. The trio began. Then Wynton Marsalis was on stage. Not just for the obligatory tune―he returned later with a JACL quartet, with pianist Dan Nimmer, bassist Carlos Henriquez and drummer Ali Jackson. Freddie Hendrix, young trumpeter with JALC, joined the fun with Nichols and company, and local trumpeter Dave Thomas and what I assume to be two of his students put on a fiery display of brass. Nichols, Linz and Bates were in top form, yielding only after a short break to the core of the JALC. Hearing Wynton in a club setting is ample proof that he deserves his lofty ratings as one of the top trumpeters of any generation. And his sense of humor and on-the-spot invention was on display as well, as he commandeered an empty cocktail glass to serve as an effective mute. I thought we stayed til the final note, only to learn later that local thunderbolts Mike Lewis (Happy Apple’s saxman) and Kevin Washington (drummer nonpareil) spent another ten minutes with Wynton before the lights went out. I’m sure they blew the house down.

So excuse me while I spend an evening at home with my cat. With a smile on my face and a glow in my ear.