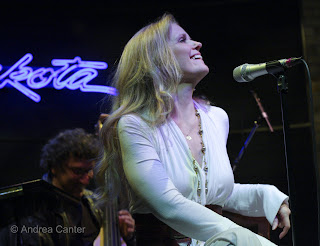 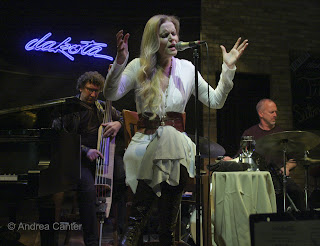 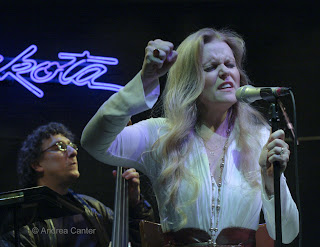 © Andrea Canter
There are a few jazz vocalists who truly stand out in the crowd. And it’s quite a crowd these days. Scott Yanow came up with over 500 entries for his “A” List of jazz vocalists in his new compendium, The Jazz Singers, and another 200 or so on his “B” list—that’s over 700 individuals identified as jazz singers, and it seems that a majority are still alive and performing.

If Yanow had limited his honor roll to a mere dozen, I expect Tierney Sutton would be among the chosen. Surely she makes the cut on my list, based solely on the last set of her two-night stint at the Dakota. Of course there is far more evidence of her stature than one set—her raft of recordings, including the new Desire, and the other three sets of the Dakota gig. But for the sake of brevity, let’s consider just one hour.

Apparently no one ever told Tierney to “never open with a ballad.” Starting the set at the point that the new recording ends, her “Skylark” soared like the revered bird over Christian Jacob’s harp-like arpeggios, wasting no time in introducing us to her signature interpretive skills. No one phrases like Tierney Sutton, whose eternal patience allows the lyric to evolve from a deep emotional well. The composer may have fashioned the melody but Tierney takes charge of each note, each bar, each break, which might come mid-verse or mid-syllable.

Tierney Sutton, and in equal partnership, her stunning band of Christian Jacob (piano), Kevin Axt (bass) and Ray Brinker (drums), will not play slave to time or rhythm. She opened “It’s All Right With Me” at a cautious pace, only to double time her own tempo on the next verse, shifting rhythm and time in generating tension that surged and receded on what she playfully described as “Cole Porter’s version of ‘Love the One You’re With.’” She shuns the ordinary, unearthing a seldom heard verse for a high-octane version of “I Want to Be Happy,” putting herself in unison with Brinker’s big beats.

Sometimes her juxtoposing of tunes was as innovative and powerful as the songs themselves. And as no two sets are ever the same—the band comes up with different pairings, different sequences, different combinations every time, even her most frequent selections take on new colors, new passions depending on the context she creates with her setlist. Tonight the yin and yang of romance were sharply contrasted with a gorgeous rendering of “Then I’ll be Tired of You” followed by an on-the-brink “Cry Me a River,” bridged artfully by Kevin Axt’s bellicose bass. From this dark mood, Tierney quickly erupted with seemingly reckless abandon in a scat-laced duet with spitfire Brinker, taking “The Surrey With the Fringe on the Top” for a wild ride over hilly terrain. Only the most agile voice could transact the lyric at this hell-bent speed without losing focus.
Back to the song cycle format, Tierney and the band presented three songs from My Fair Lady: A conversation between Jacob and Axt to start “Wouldn’t It Be Loverly?” worked its way into a half-scat verse in which Tierney played with each syllable; “I’ve Grown Accustomed to Her [His] Face” took on the shroud of a ritual chant over a beautiful bass vamp, Jacob withholding his contribution until mid-verse and then shifting the mood from holy rite to Evanescent swing; “Show Me” filled the air with drama.

The mood shifted again as Sutton and Jacob offered Henry Mancini’s “Two for the Road” in duet, in exquisite partnership. Has she ever hit an off note? Next, “Daddy’s driving,” announced Tierney, as the band launched an almost sinister version of “The Lady Is a Tramp,” perhaps darker in this set due to its placement following a luxurious ballad. This was Brinker’s playground and he can turn his attack on a dime, from flailing brushes to snare swats to a sudden, delicate touch on the cymbal. On tunes like this one, Tierney’s hand gestures seemed to signal each shift in rhythm, each mood of the lyric, spontaneous yet perfectly choreographed to the score.

Tierney Sutton recorded a set of Bill Evans’ tunes (Blue in Green) and shared one as an encore and tribute to two friends from the Chuck Mangione Band lost in the recent Buffalo air crash. Presented with spare but elegant instrumentation, “We Will Meet Again” was a hauntingly beautiful finale.

Sometimes, music truly feeds the soul.
Photos: Tierney Sutton and band at the Dakota on the first night, March 25th. (Photos by Andrea Canter)
Posted by Canterjazz at 1:42 AM