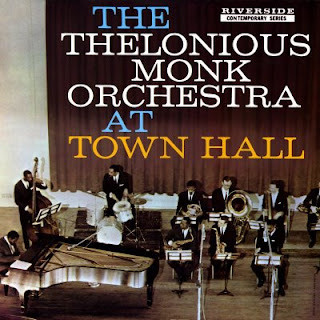 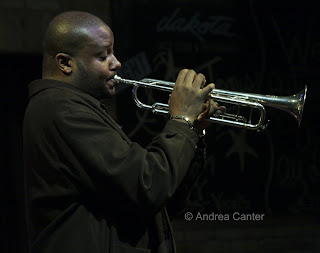 This winter marks the 50th anniversary of one of the legendary concerts of jazz—Thelonious Monk’s Town Hall concert, performed with a ten-piece band—Monk’s first big band performance. Last week, two concerts at Town Hall, February 26-27, celebrated the original Town Hall gig, the first as a reenactment of sorts featuring the Charles Tolliver Trio, Quartet and Tentet, the second a more interpretative, mixed media presentation led by Jason Moran with his “Big Bandwagon” octet. Last night in Minneapolis we got our own celebration of Monk with the Jazz at Lincoln Center Orchestra.

The idea of a big band, and one more known for its traditional repertoire, playing the craggy tunes of Monk was intriguing. There was no question that the musicians of JALC would be up to the task of tackling the often-difficult rhythms and intervals of the “Genius of Modern Music.” But ultimately the question was more basic—can big band arrangements and JALC spit-and-polish adequately translate Monk’s music? For the most part, I have to say “no”---which is not to negate an evening (March 6th) of virtuosic soloing, mostly peppy orchestrations, and an enthusiastic crowd at Minnesota Orchestra Hall. The music of Monk, however, is not dependent on virtuosity or tight arrangements, but rather on the spontaneity, interaction, and free will of the musicians, on the unpredictability of time and space stamped on such tunes as “Epistrophy” and “Criss Cross.” Big band arrangements seem to be the antithesis of Monk’s essence and appeal. Of course Monk himself did write arrangements for the ten-piece ensemble that gathered at Town Hall in 1959, choosing some of his lesser known tunes as those that might best translate into larger band charts and adding tuba and French Horn. JALC made no effort to revive that concert or instrumentation, and in fact played only one tune from that performance (“Crespuscule with Nellie”), as well as three more that Monk later recorded in big band format, “Epistrophy, ” "We See" and “Four in One.”

Still I have to give Wynton Marsalis and company credit for the attempt and for bringing Monk to mainstream concert goers. Many who might not otherwise stop to listen to Monk, or who have found his music too challenging in the past, were introduced to some great melodies (e.g., “We See,” “Ugly Beauty,” “Crespuscule With Nellie”). We all were treated to some burning solos—altoist Ted Nash, trumpeter Ryan Kisor and bassist Carlos Henriquez on “Epistrophy”; drummer Ali Jackson on “Four in One”; pianist Dan Nimmer on “Criss Cross”; and, most elegantly, trumpeter Sean Jones on “We See.” But for me, it’s the playful bumps and angles that make Monk’s music unique, and the JALC’s large band arrangements smoothed out those blemishes. In a way, the music was too beautiful, too resolved. Monk’s is an “Ugly Beauty.”

For an encore, Wynton returned to the stage with just a sextet—trumpet, sax, trombone and rhythm section. They ran through “Green Chimneys”—bumps and angles and blemishes in full view. It was Monkish. It was glorious.

So what was the outcome at Town Hall last week? You can get a taste of the result from an eight-minute studio video of Jason Moran’s ensembe at http://www.wnyc.org/shows/lopate/episodes/2009/02/25/segments/124763. Relative to the (larger) JALC effort, Morans’ arrangements preserve more space, the piano more dominant. From reviews, Tolliver’s varying combinations (from trio to full tentet) offered the most authentic recapitulation of the original Town Hall concert, while Moran’s octet (including tuba) offered less angular, more “hallucinogenic” and impressionistic interpretations (see Will Friedwald’s review in the Wall Street Journal, March 4, 2009). Both Town Hall concerts probably appealed most to those already enthralled with Monk as well as modern post bop. We’ll get to see/hear the multi-media event on May 9th when Jason Moran brings the Big Bandwagon and “In My Mind: Monk at Town Hall” to the Walker Art Center.
Photos: (Top) Monk at Town Hall (1959); Jazz at Lincoln Center Orchestra; Sean Jones of JALC, during a gig at the Dakota last fall. (Jones photo by Andrea Canter)
Posted by Canterjazz at 2:22 PM