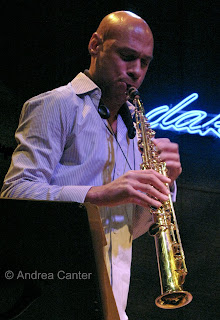 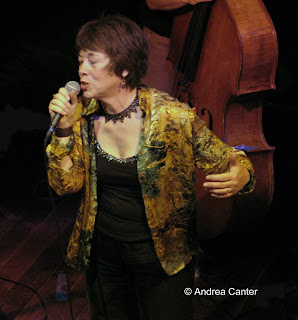 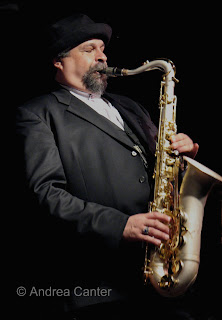 © 2009, Andrea Canter
I figure I am behind enough for this week that I should just keep looking ahead!

There is one more night of pure postbop bliss at the Dakota with the Joshua Redman Trio. The opening sets last night featured some of the most inventive and musically satisfying sax to grace the club stage in recent years, as Redman has only grown in artistry as both performer and composer. The young lion is now a mature musician who trades bravura virtuosity for confident risk-taking, while also opening wide spaces for his talented cohorts, bassist Reuben Rogers and drummer Gregory Hutchinson. Their shouts of mutual admiration and big grins throughout the set tell it all. Last sets tonight at 7 and 9:30 pm (March 3rd).

The Dakota is having a blockbuster week. Wednesday night is the return of Claudia Schmidt, the folkie-turned-jazzer who recorded live with the Dean Magraw Quintet three years ago and will reunite with the dazzling guitarist and mostly the same ensemble, with Brandon Wozniak replacing the touring Mike Lewis. Stick around for young bass/vocal sensation Esperanza Spalding on Thursday night. I caught her with an equally youthful trio at the Detroit Jazz Festival last September. Easy to see why her alma mater Berklee wasted no time in giving her a faculty appointment. Cap off the weekend with a rare evening in the lyrical arms of pianist Kenny Werner and his trio, at the Dakota for an unusual Saturday night gig. (Unusual for the Dakota—this isn’t party music!) Werner is a longtime personal favorite who has not made the Twin Cities scene in a long time, but has been releasing recordings in varying configurations from instrumental sextets to big bands to duets with Roseanna Vitro. His affinity for singers will be on display Saturday night when he welcomes guest vocalist and local icon Debbie Duncan.

Keep your table warm at the Dakota, the SF Jazz Collective returns with a tribute to the compositions of McCoy Tyner on March 10th. Just one night, two shows, seven of the most productive and creative jazz musicians on earth sharing the stage. (Normally the SFC is an octet—vibraphonist Stefon Harris is on a one-year leave.) New leader Joe Lovano has not been heard here in a few years; in the interim he has released some dazzling duets with Hank Jones as well as one of my favorite recordings of 2008, Symphonica with the WDR Big Band. The rest of the band can readily hold their own on any stage—Dave Douglas, Robin Eubanks, Miguel Zenon, Renee Rosnes, Matt Penman, Eric Harland.

The Jazz at Lincoln Center Orchestra, led by Wynton Marsalis and featuring 14 more of New York’s finest, will do a two-day residency this weekend, starting with a day of high school band clinics on Friday, a free family concert on Saturday afternoon, and back to back evening concerts at Orchestra Hall. Friday night they focus on Thelonious Monk—which might seem like a conceptual stretch for Marsalis, but he IS a student of jazz history and Monk is certainly one of history’s most colorful figures. Saturday night will be a more varied program highlighting the JALC’s soloists.

Not enough choices for the weekend? It’s really too much—for free and unforgettable, you have two nights to hear one of the most creative of modern pianists, Frank Kimbrough, in trio (with Gordy Johnson and Phil Hey) on Friday night (3/6) as part of the U of M Jazz Fest weekend, and with Jazz Ensemble I on Saturday night (3/7). Seriously, I am planning to be cloned.

More casually speaking, chanteuse Vicky Mountain joins swing guitarist Reuben Ristrom for some exquisite brunch fare at Trygs on Sunday (3/8, 11 am – 3 pm) and you can usually wash down your pizza with beer and Charmin Michelle at Fireside Pizza in Richfield every Monday and Wednesday night.

Looking ahead? Dean Magraw has a new trio project, Impulso, with Jay Epstein and Brandon Wozniak, debuting at the AQ on March 13-14; Fat Kid Wednesdays open for Haley Bonar at the Dakota on March 13th; the Reid Kennedy Trio celebrates the release of their sublime CD at the AQ on March 18th; and the AQ also presents one of the most energetic young bands in the region when The Alternates take the stage for the early show on March 19th.

Rest up.
Photos: (Top), Joshua Redman at the Dakota on March 2nd; Claudia Schmidt recorded live at the Dakota in 2006; Joe Lovano returns with the SF Jazz Collective. Photos by Andrea Canter.
Posted by Canterjazz at 4:42 PM