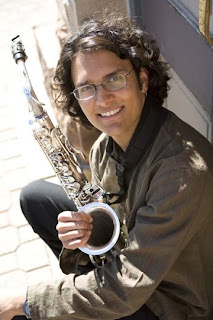 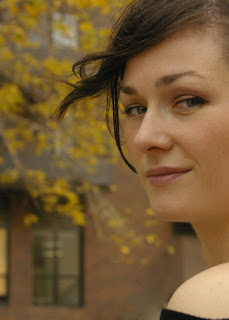 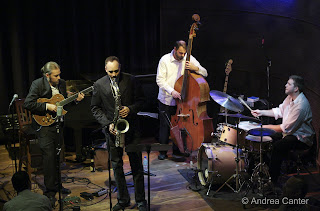 It’s another weekend that supports cloning, at least to enable jazz fans to be in two places at once. Club hopping might be worth considering:

The Artists Quarter this weekend hosts a trio that can only be described as transcendent. Chris Lomheim, Anthony Cox and Phil Hey, three of the Twin Cities’ busiest and most effective jazzers, have proven their flexibility across contexts from bop to free improv, from comping for vocalists to heading their own projects. As a trio, they first came together about two years ago on the stage of the Artists Quarter, and this weekend they return to the scene of that first (and several subsequent) fantastic voyages. In their previous gigs, they typically played about a half-dozen elongated pieces per set, ample time to search, develop, explore and resolve without ever losing the attention of their audience or the intention of their music. Pieces as familiar as “Caravan,” “How Deep Is the Ocean,” and “Alone Together” are recast as modern discoveries; tunes as exquisite as “So Tender” (Keith Jarrett), “We’ll Be Together Again” (Fischer and Laine), and “Little B’s Poem” (Bobby Hutcherson) maintain their dignity amidst the trio’s musings and reworkings; and bop masterpieces like Powell’s “Sub City” and Hodges’ “Squatty Roo” explode in multiple directions, the spatter to be reassembled, the tapestry rewoven. They will be on the AQ stage at 9 pm Friday and Saturday (3/20-21).

Across the river at the Dakota, it’s also an interesting and very eclectic weekend, starting with local rising star vocalist Nancy Harms, who has assembled a hip and popular quartet with Phil Aaron, Graydon Peterson, Jay Epstein, and Kelly Rossum. Kelly rarely performs with a vocalist so you know this will be a special evening (Friday, 3/20). And there’s a triple header Saturday night (3/21) running the gamut from classical to global avant garde. The Chiara String Quartet bring classical music to the club stage at 7:30 pm, followed by acclaimed vocalist/actress Regina Williams at 9 pm. Then it’s the weekly Late Night at the Dakota series, and a very special treat awaits those who can stay awake and alert for the 11:30 pm start: From the Denver area comes the Aakash Mittal Quartet, and I promise this will be one of the most exciting ensembles you will hear this spring... and beyond. Mittal draws upon his personal roots in American bop and Indian folk traditions to create an original cross-cultural tapestry of elegant melodies and free-wheeling improvisations with a talented ensemble of guitar, bass and drums.

For better or worse, depending on how much conflict you like in your jazz schedule, Saturday night (3/21) is also the designated “final” live performance of John Coltrane’s “A Love Supreme” by the Atlantis Quartet, at the Riverview Café and Wine Bar in south Minneapolis. The quartet (Zacc Harris, Brandon Wozniak, Chris Bates, Pete Hennig) first tackled this epic work as a Halloween treat at the Dakota last fall. It’s a bold move for a relatively young band, but they pulled it off admirably and bring it back one more time as part of the Riverview’s monthly Showcase series. But Zacc assures us this will be the final performance! There will also be original compositions and creative twists on covers. If you missed the Halloween performance, don’t make the same mistake twice. Showtime is 8 pm, which means you can still catch Mittal at the Dakota or Cox/Lomheim/Hey at the AQ later!

Sunday afternoon brings yet another rare opportunity to hear one of the Twin Cities most exciting artists in a concert hall setting. Tanner Taylor salutes his muse Oscar Peterson at the Bloomington Center for the Arts (3/22, 2 pm), backed by bassist Graydon Peterson, drummer Mac Santiago, and special guest, sax king Dave Karr; Arne Fogel serves as emcee. Many have heard Taylor spice up the band behind a long list of area vocalists, but seeing and hearing Tanner leading an instrumental ensemble is surely one of the most satisfying experiences in local music. Like Peterson, Taylor is hard swinging, technically gifted, and clever in his interpretations. Plus in this setting, there will be no clinking glasses or distracting chatter.

The big gig of the coming week, I think, is the return of Tierney Sutton, who will spend two nights (four sets) at the Dakota, March 25-26. It’s been quite a while since Sutton was in town, and she is celebrating the release of Desire on Telarc with her long standing band, Christian Jacob, Trey Henry and Ray Brinker. Sutton has a unique style that places her among the most creative of modern interpreters. She reinvents the melodies, the harmonies, and in the process, the emotional impact of each song. The new recording brings fresh readings of Cole Porter, Dave Frishberg and Johnny Mercer, among others.

There’s always a lot going on among Twin Cities jazz artists---Connie Evingson with the Twin Cities Hot Club (3/22) and Lee Engele (3/23) at the Dakota; Marv Dahlgren (3/25) and Pete Whitman’s X-Tet at the AQ (3/26); and on the far end of our modern scene, Volcano Insurance with Chris Bates, Adam Linz, Nathan Hanson and Joey Van Phillips at the Clown Lounge (3/23).

Looking way ahead, mark you calendars for the annual Twin Cities Jazz Festival, downsized to one weekend at Mears Park in St. Paul, June 18-20. Watch for details.
Photos (top): Aakash Mittal comes in from Denver for Late Night at the Dakota on 3/21; Nancy Harms takes the Dakota stage with a quartet featuring trumpet master Kelly Rossum on 3/20; the Atlantis Quartet performs Coltrane's "A Love Supreme" one more time at the Riverview Cafe and Wine Bar on 3/21. (Mittal photo courtesy of the artist; Harms photo by Mark Hannan; Atlantis Quartet by Andrea Canter.)

Posted by Canterjazz at 3:30 PM