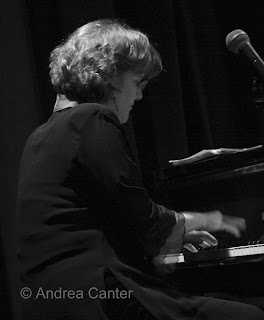 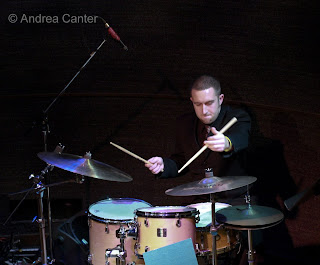 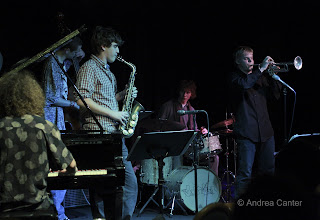 My recommendations this week are as diverse as jazz, from post bop piano trio to Afro-Cuban firestorms to guitar wizardry and youthful exuberance. Never dull on the Twin Cities jazz scene!

Although it may sport the area’s worst sound system, the little music corner inside Crave at The Galleria (Edina) also hosts some of the area’s top chamber musicians and vocalists. The “house band” generally features Laura Caviani and friends, and tonight (Friday the 13th—good luck in music!) the friends include seldom-heard bassist Kevin Clement, drummer Phil Hey, and birthday girl vocalist Lucia Newell. Clement flies planes for Northwest so his gigs are infrequent but he is well worth seeking out. The ambient chatter should dissipate by 10 pm or so and the kitchen makes the wait worthwhile.

One of the area’s most intriguing small bands, Fat Kid Wednesdays, does a double play tonight (3/13), opening at the Dakota for Haley Bonar and then running crosstown for the evening show at Café Maude at 54th and Penn in south Minneapolis. This little haven of experimental music and great bar food can be crowded and noisy, but the music is among the most exciting in town. FKW is case in point with Michael Lewis, Adam Linz and JT Bates. Each deserves his own star on the Twin Cities Jazz Walk of Fame.

And on Saturday night, start off at the Dakota and help the Twin Cities’ most swinging couple, Ginger and Bobby Commodore, celebrate their March birthdays with their annual bash. Just be careful if you’re holding a wine glass when Ginger hits her high notes---I’m sure she can shatter glass. But it will be a lovely explosion.

Two worthy events within about 100 feet of each other on Sunday night (3/15): At Brit’s Pub (upstairs in the Clubhouse), guitar guru Paul Renz teams up with Berklee College classmate, flautist Anders Bostrom, and his usual bandmates for an evening of “beyond bop.” They’ll be chilling out after a duo recording session. Meanwhile, across the street at Orchestra Hall, Nachito Herrera is back in town with Juan deMarcos and the Afro Cuban All-Stars. The band has been touring out west and through the Midwest for the past month following a week of rehearsals at MacPhail, and head east after tonight’s gig to finish the tour in New York and New England. I had an opportunity to sit in on a couple rehearsals and this is one of the most exciting, talented ensembles of Afro-Cuban music you will hear. Many of the musicians are alums of the famed Buena Vista Social Club and its offshoots. And we already know what a volcanic pianist we have in Nachito. Dancing shoes are highly recommended.

Looking for something a little different for St. Patrick’s Day? You can get green beer and Irish jigs in St. Paul but instead catch singers Dorothy Doring and Donald Thomas at the Dakota. It might not feel like Dublin but you’ll hear some great standards and blues from two very satisfying voices. Good chance Jack Riebel will have something besides blarney on the menu.

Young Reid Kennedy, one of the most exciting of a new crop of drummers, has assembled a radiant trio with pianist Chris Lomheim and bassist Graydon Peterson, and on Wednesday night (3/18) they celebrate their debut recording, Reflections, at the AQ. Entirely original compositions from Kennedy and Peterson, the CD is a remarkably mature and elegant feast. Enjoy it live.

And speaking of young, youth rules during an early set at the AQ on Thursday (3/19) when The Alternates grab the stage. These guys are still in high school but their sound, their creativity are years beyond. They made quite an impression at their debut gig in January, and return now and again next month (4/16). Jazz is alive and well. And well into the night—enjoy a set with the Dave Karr Quartet at 9 pm and then head out to the Red Sea for a late set with Pooches’ Playhouse, featuring guitar star Joel Shapira, bassist Pooch Heine and friends. Plan to sleep in on Friday.

And if you need a break from jazz, or just like to keep your ears open, Yo Yo Ma returns to Orchestra Hall with his Silk Road Project on Monday (3/16). It’s not bop, but it is transcendent.

Posted by Canterjazz at 5:35 PM