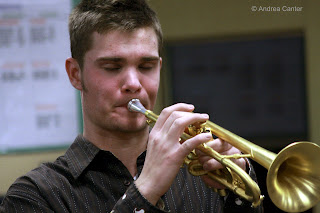 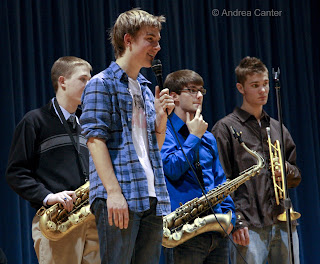 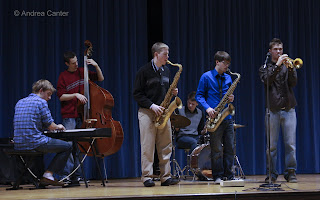 A few years ago, master trumpeter and jazz educator Kelly Rossum suggested a partnership between the MacPhail Center for Music, where he heads the jazz program, and the Dakota Foundation for Jazz Education. The result was the first edition of the Dakota Combo, a highly selective ensemble of the area’s most talented high school jazz musicians. After a successful first season culminating in a performance at the Dakota Jazz Club with guest artist Bobby Watson, the project expanded to a full school year in 2007-08. One of the added components was a day of school visits, in which the Combo presented music, invited students to jam, and talked about their inspirations and aspirations. While there would continue to be an annual student clinic with the guest artist, the school visits would put the Combo musicians in teaching roles.

“Teaching requires a musician to reevaluate her/his own playing and style,” explained Kelly. “By being involved with these clinics and master classes, the students will have an opportunity to share their own experiences and learn about other musicians’ paths through jazz. It’s a level of communication that can go beyond just listening to music; musicians (both young and old) can share their passion for the music.”
Last week, the musicians of the third edition of the Dakota Combo shared their passion for jazz with peers and younger students with a day of performing and interacting with band and music classes at Minnetonka High School (home school for Combo musicians Jake Baldwin and Cameron LeCrone), Sheridan K-8 Fine Arts and Ramsey K-8 Fine Arts, both in Minneapolis. At each school, the Combo offered a range of tunes, including arrangements of standards like “Cherokee” and “On Green Dolphin Street,” and at least as many original compositions. Original repertoire is a significant part of the Combo experience, and their forthcoming recording session (another new component of the program) will include only original music.
But the point of the school visits is to not only inspire by demonstrating this high level of skill but to provide some insight into the development of that talent. At Minnetonka, the question “Why do you play jazz?” elicited comments about the origins of their interests in jazz and favorite performers. Trumpeter Jake Baldwin found this to be a useful exercise. “Answering questions like ‘why do you play jazz?’ actually forced me to do quite a bit of introspection as to my personal motivations for playing this music.” Added tenor saxophonist Tony Pistilli, “The questions helped keep me honest, too. It's easy to never bother to think why you play jazz, or the instrument you do.”
The middle school students at both Sheridan and Ramsey were relentless in expressing curiosity: How old are you? What is the difference between the alto and tenor saxophone? How much time do you spend practicing? Where do you want to go to college? Do you just make up the music as you go along? Why don’t you sing? Why aren’t there any girls in your band? (A good question---of eighteen students who auditioned, only one young woman participated, now an alternate. For each of the first two editions of the Combo, there was a female on tenor sax.) And inevitably, someone asked Kelly Rossum, “Where do you go for your hair?” (FYI, that modified mohawk is produced by the Hair Police.)
Many in the audience were clearly not familiar with jazz. Some were clearly in awe of the talents of students their own age or not all that much older. Trumpeter Jake Baldwin, in his second year with the Combo, liked the opportunity to not only share his music but the broad sources that have inspired him. “When I was younger, the most important thing I was told is that inspirations can come from everywhere. I think it was really important for the students to hear that we don't just sit in a cave and listen to jazz all day. In fact, I listen to just as much rock and hip hop as I do jazz. I base a lot of my phrasing and lines off of Thom Yorke (the lead singer from Radiohead). Hopefully they will now be able to listen to the music they hear everyday in a new way.”
Drummer Camerone LeCrone noted that “what made this experience particularly unique was the fact that I was sharing it with a crowd that was generally younger and inexperienced with the kind of music that I was performing. It was rewarding to see it when one of the kids we were playing for genuinely seemed interested. I hope that by performing at least a few of the kids were inspired to pursue jazz music, whether it's performing or just listening and appreciating jazz.” Tony Pistilli added a similar perspective: “I kept on thinking that some of the kids we were playing for were going to be the next top high school jazz musicians. Who knows! They could have been inspired by our performance to go home and practice their butts off. ... I'd be ecstatic if I gave one of those kids the push they needed.”
And maybe for at least one young listener, this will prove to be that push, that “ahah” moment that might one day lead to an audition for the Dakota Combo. And one day, maybe not all that far away, one of those bright-eyed 6th graders might echo the sentiments of Jake Baldwin:
“Music is my dream and I plan on following it until I fall flat on my face. Even if it doesn't work out as a career I don't think I'll ever be able to put the horn down for good. The trumpet is as much a part of me as one of my limbs.”
Photos: (Top), Jake Baldwin blow on trumpet at Ramsey; Joe Strachan and cohorts answer some pithy questions from Sheridan middle school students; the Dakota Combo on stage at Sheridan. Photos by Andrea Canter.

Posted by Canterjazz at 5:05 PM