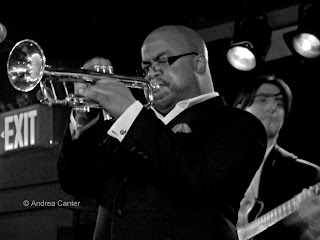 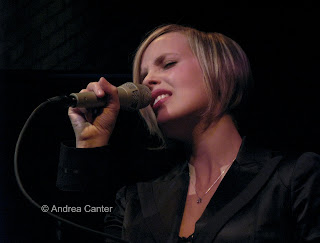 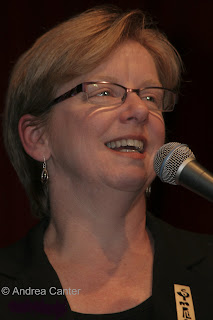 Last week it was a fanfare of trumpets. Nicholas Payton finishes off the trumpet fest on Saturday (2/14), with the help of the great brass ensemble, The Hornheads, in the company of the best regional jazz band in the Midwest—the JazzMN Big Band. JzMnBB plays three or four concerts each season in the very spiffy setting of the Hopkins High School Performing Arts Center. (My high school performance “center” didn’t look anything like this! There’s even a concessions area.) Payton was a “young lion” who has continued to roar as he reaches his mid 30s, and this is a rare opportunity to see him locally in a big band context. (He will return in April with the Blue Note 70th Anniversary Septet at Orchestra Hall.) And the Hornheads? Locally damaging brass with Michael Nelson, Kenni Holman, Dave Jensen, Kathy Jensen and Steve Strand, this is also the core of the JzMnBB brass section.

One more horn of note, Pete Whitman brings in his quartet for one night at the Artists Quarter tonight (2/13). We see Pete in larger contexts regularly—with his X-Tet and with the JazzMN Big Band. The opportunities to hear this multi-talented reedman are far fewer. Tonight he’s on stage with Peter Schimke, Jay Young and Kevin Washington so you know the music will vary from sublime to volcanic and all points in-between.

Vocal jazz takes the spotlight in the coming week, starting with VocalEssence’s annual Witness program at the Ordway Sunday afternoon, featuring the great NEA Jazz Master pianist and educator, Dr. Billy Taylor. Taylor reprises his 1998 performance of his Peaceful Warrior, a tribute to Martin Luther King. Bill Clinton was President in 1998; with our nation’s first African American President, this performance is even more meaningful. Also making this a special occasion is the fact the Taylor officially retired from performing a few years ago, but apparently not completely as he will be on stage with his trio (Chip Jackson on bass and one of my favorite drummers, Winard Harper. Harper is a graceful acrobat with sticks.) For more on this event, see Pamela Espeland’s interview with Taylor in “Arts Arena” at http://www.minnpost.com/

The 2008 Juno winner for best vocal album, Sophie Milman returns to the Dakota for two nights (February 16-17). Like her fellow Canadian Diana Krall, Milman is a skilled interpreter of standards whose cross-cultural background (a Russian immigrant who lived in Israel through much of her childhood before landing in Canada in her teens) adds a unique signature to her work and repertoire. She’s not yet at Krall’s level of improvisation, but she is only in her mid 20s.

Veteran of Bobby McFerrin’s Voicestra and head of vocal music at McNally Smith, Judi Donaghy releases her latest recording with the Wolverines Quartet (Swing On!). And they really do swing on! This one is produced by the Twin Cities Jazz Society. The release party scheduled for the 18th has been postponed--stay tuned! In the meantime, if you contact TCJS you can learn how to order the CD.
A few more nights of note---Saxman Gary Berg celebrates his 70th at the AQ on Wednesday (2/18); the Phil Hey Quartet move in on Thursday (2/19); Phil joins Gordy Johnson and Tanner Taylor as the Dakota Trio at the Dakota on the 18th.

And try to rest up for the following weekend, when Kurt Elling and his tribute to the Coltrane/Hartman partnership land at Ted Mann (2/20) and the annual Bobby Peterson Tribute fills two nights at the Artists Quarter (2/20 and 2/21)!
Photos: (From Top), Nicholas Payton (a couple years ago at the Iridium in New York); Sophie Milman at the Dakota in January 2008; Judi Donaghy (with the Wolverines in 2007). Photos by Andrea Canter.
Posted by Canterjazz at 12:16 AM