A Lesson in Life and Bebop With James Moody 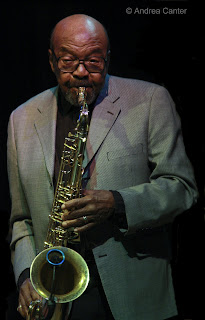 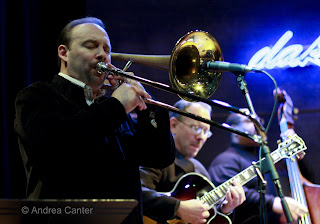 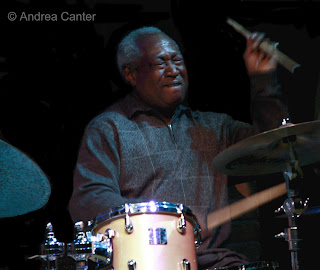 Anyone uncertain as to the definition and nature of “bebop” should enroll in the James Moody Academy of Jazz. At the Dakota Jazz Club, Moody’s opening set last night could have served as a lesson for the uninitiated as the 83-year-old saxophonist conducted nonstop experiments in rhythm and harmony, exposing, renovating, and designing the details of every structure. That he conducted his class with equally nonstop humor and humility made the lesson all the more effective and entertaining.

Moody’s most recent recording is a quartet outing featuring 90-year-old Hank Jones on piano (Our Delight, IPO 2008). Together, Moody and Jones exude elegant restraint, taming the bop vocabulary to emphasize melody, the rhythm section assertive yet clearly serving the horn. In contrast, backed by a quartet headed by trombonist Jay Ashby and with guitar (Marty Ashby) as the only chordal instrument, this live gig was more about interaction and exploration, the music at times majestic and mellow (“Body and Soul”), but more often a sonic playground where everyone got a turn to be “it.” In the tradition of the great bands of the bop era, each tune was fully explored, the band covering only six compositions in the hour-long set.

After the quartet (the Ashbys, bassist Dwayne Dolphin and drummer Roger Humphries) warmed up the stage with “Just Squeeze Me,” Moody joined the fray with a most appropriate rendition of Dizzy Gillespie’s “BeBop.” A round-robin of agile soloing from all set the tone for the set and particularly warned the audience that trombonist Jay Ashby (strutting through a quote from “Putting on the Ritz”) is a force deserving greater visibility.

James Moody has a story –or a joke—to fill every space between tunes. He referred to his octogenarian status and accompanying “CRS”—politely reframed as “Can’t Remember Stuff.” He also was quick to point out that the older he gets, the more he realizes what he doesn’t know—although he delivered a convoluted monologue to share this observation. The saxophone could just be a prop for a hilarious stand-up comedy routine, but of course in the hands and mouthpiece of James Moody, the horn is no prop but an extension of a man’s mind and heart. “Woody ‘N You” is covered warmly on the new recording but was more of a burner at the Dakota. Roger Humphries may be one of the very best kept secrets among drummers, soloing with rolls of thunder and punctuations of hail, wind and rain. (Moody asked the audience, “Did someone make him mad?”)

Poking fun at himself and government leaders, Moody told the audience that “if you can’t dazzle them with brilliance, baffle them with bullshit!” And then he dazzled us with baffling brilliance on “Body and Soul.” A tune that in lesser hands can be merely trite or too precious, this is a standout track on Moody’s release with Hank Jones, but given a very different treatment last night when enveloped in the brass and strings of the quartet. Marty Ashby’s guitar added an ambient layer, a mesh that supported a seamless, back and forth transition between Moody and Jay Ashby. Moody, like an old-time tailor, weaved one solo into another, never dropping a stitch in passing the thread back to Jay, who slipped through canyons of notes like a hiker on slickrock.

To the delight of the audience, Moody closed the set with his vocal signature, “Moody’s Mood for Love,” his gruff tone, big smile and sudden shifts in dynamics both humorous and skillful, as he moved in and out of blues, scat and an almost-hip hop cadence.

My only disappointment was that Moody did not bring the flute on stage during the first set. Although he once told an interviewer that the does not consider himself a flautist, but merely a “saxophonist who plays the flute,” he is one of the most accomplished and lauded on the instrument. Maybe tonight. I'm going back for another lesson.
Photos: (Top-Bottom), James Moody; Jay Ashby with brother Marty; Roger Humphries, all on the stage of the Dakota, January 12th. Photos by Andrea Canter.
Posted by Canterjazz at 1:15 AM