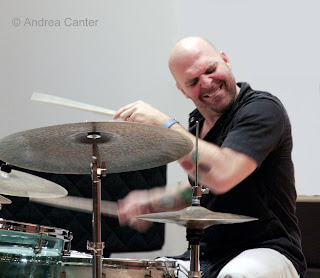 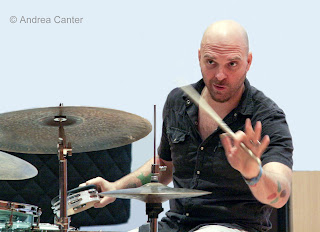 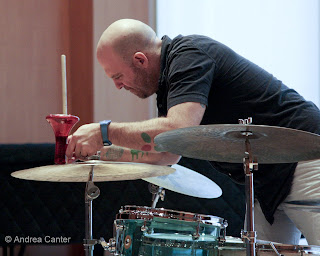 Observing a musician’s “master class” provides a different perspective than attending a concert or gig, taking a lesson, or watching Ken Burns. A master class is part demonstration, part performance, sometimes part direct instruction―it all depends on the musician and the nature of the audience.

As an observer, I’ve attended a few master classes at conferences such as the late IAJE convention. In 2007, drummer Matt Wilson used volunteers to try out some of his ideas for “getting to know your drums.” One exercise involved striking the cymbal with different objects at different points on the metal surface and listening to the way the sound dissipated. It’s difficult to be aware of such aural details in the midst of a quartet or big band gig.

I’ve now attended two master classes at MacPhail Center for Music in downtown Minneapolis. Janice Borla presented a master class for voice students (and observers like me!) two years ago, using critiques of student performances as the centerpiece. And last Saturday afternoon, I attended what was surely the most entertaining master class of the season, a drum “clinic” presented by local legend Dave King, percussion master for the edgy bands The Bad Plus and Happy Apple. Dave is well known worldwide not only for his powerful and sleight-of-hand technique on the trapset but also for his arsenal of atypical percussion “instruments”—items never intended for musical purposes. Who else uses ET Walkie-Talkies, plastic megaphones, and other children’s toys to evoke a menagerie of sound from otherwise traditional drum heads and cymbals?

With deadpan delivery and a monologue that could serve as a Saturday Night Live script, Dave talked about a number of elements and strategies in jazz drumming and gamely took on questions from an audience filled with drummers, drum students, and drum fans, some as young as five years old. Throughout the two hours, a common thread in Dave’s commentary was the centrality of the relationship between musician and instrument, and particularly the interactive quality of touch for a percussionist.

Just as Matt Wilson had emphasized the nuances in contact between stick and metal, Dave talked about “bringing the cymbals to life yourself rather than relying on technology” and thinking about the gear as a “blank canvass” from which to create. The drummer’s touch—not the sticks, the drumheads, even the ET Walkie Talkies—is what makes each musician unique. “There’s an infinite variety of touching,” notes Dave, and each touch alters the time, the tone, the color of the sound.

King demonstrated his tactile kinship with his kit through several prolonged solos that yielded a cornucopia of sounds, some very musical, some simply odd, even whimsical. If there are infinite ways to execute a percussive act, there are infinite resulting patterns of sound, some tonal, many atonal. In the absence of other instruments, percussion must feed its own fire. Dave King builds that fire from a few logs that ultimately burst into flame as a roaring inferno or smoldering campfire or mere flicker. All this through his ability to alter sound through touch as much as through his choices of props. A creaking hinge is suggested by a drumstick scraping along the skin of the drumhead. A fierce explosion is created by a stick crashing down on the edge of a ride cymbal (Dave says he never uses “crash” cymbals, but he crashes nevertheless). A low whine rises from a tom-tom when a plastic megaphone serves as both a percussive agent and sound amplifier. And Dave uses direct touch often, striking the snare with one hand while the other attacks cymbal with stick or muting the drumhead with an elbow. (I’ve seen local drum counterpart J.T. Bates as well as Matt Wilson generate a similar effect with the heel of his foot.)

Sounds from a master percussionist can be soothing or scathing, energizing or relaxing, violent or conciliatory, smooth or jagged, abrupt or flowing. Dave King describes the “iconoclastic thinking musician” as one who is constantly seeking an individual sound, one who is guided by his vulnerability, the “human intent”—one who is “in touch” with his (or her) relationship to the instrument. Or perhaps one who would remove the rivets of his ride cymbal “to change its potential.”

It’s not a bad approach to life, even for us nonmusicians.
Photos: Dave King demonstrates and philosophizes about touch, time and sound. (Photos by Andrea Canter at the MacPhail Center for Music on November 22, 2008)
Posted by Canterjazz at 4:45 PM