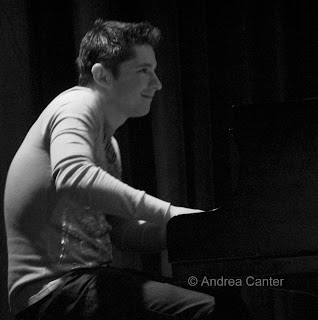 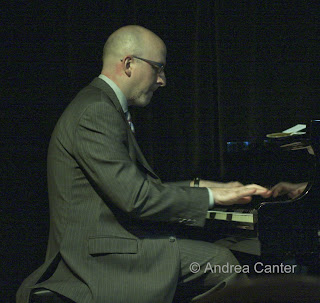 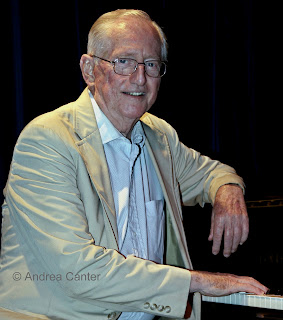 There were three generations of keyboard giants in town this past week, although only one has really stirred much press. And at 21, he is the youngest.

When Eldar Djangirov was born in Kyrgyzstan (in the former Soviet Union) in 1987, Rick Germanson was a teen piano whiz in Milwaukee; Eddie Higgins had been playing piano for over 50 years (he started at age 4). Eldar took over the Dakota for one night on October 29th; Rick Germanson returned to favorite haunt, the Artist Quarter, for the weekend, while Eddie Higgins capped the week with one night at the Dakota on Saturday. If you worked out your schedule carefully and drove with a bit of gusto, it was possible to catch all three, even making multiple sets for Eldar and Rick. And among this threesome, you would have heard nearly all that one can imagine in modern jazz piano.

From the late 50s through the 60s, Eddie Higgins was a mainstay at Chicago’s famed London House and later Mr. Kelly’s. Although his name was never as well known, his sideman credits covered modern legends, from Coleman Hawkins and Jack Teagarden to Freddie Hubbard and Wayne Shorter. In recent years, Eddie has visited the Twin Cities a few times and made two live recordings at the Dakota—in 2000 at the old club in St. Paul with bassist Brian Torff and local swing guitar man Reuben Ristrom; and in the new club in 2005, again with Ristrom and Tom Lewis on bass. For this return—nonrecording session—gig, Eddie once again called on Ristrom, adding young bass standout Graydon Peterson. The cross-generational interaction gave the evening a special warmth.

In addition to some of the most graceful piano chops to ever channel the standard repertoire, Eddie Higgins, now 76, is a born storyteller and not shy about sharing this talent. He not only introduces every tune (an increasingly rare accompaniment to modern gigs), he has a story about many of them—when he first heard it, when he first played it, and perhaps a few tidbits about the composer. He recalled his first time playing “Prelude to a Kiss” (“when I sat in with Johnny Frigo”), the time he learned Jimmy Rowles’ “The Peacocks” ("while playing on a cruise ship in the Caribbean"), and his anticipation in presenting Hoagy Carmichael’s “Georgia on My Mind” at the London House with Hoagy himself in the audience. (Hoagy and his wife, it seems, came into the club already a few drinks beyond the minimum, and left before Eddie played a note of Hoagy’s famous song.)

But it was the opening “mystery tune” on Saturday night that immediately announced Eddie Higgins as a lot more than an accomplished swinger. A long introduction that recalled (or really was) a Bach toccata swirled into “Autumn Leaves,” and even the usually rambunctious Dakota weekend crowd paused to listen—a state that ended all too soon. By the time the trio launched into “The Peacocks,” the din overshadowed the complexities and softly executed elegance of the composition. Still, any night with Eddie Higgins is a pleasure. The breadth of his music knowledge is as vast as the depth of his passion for expressing it.

Rick Germanson studied and gigged around Milwaukee, toured with the late Frank Morgan, and took top honors in the American Pianists Association Competition in 1996. He’s “house pianist” for the Ruth's Chriss Steakhouse in midtown Manhattan, an odd but steady gig that makes the restaurant one of the best spots for intimate jazz in the Big Apple. His other steady jobs of late are perhaps more telling, holding the piano chair for Louis Hayes’ Cannonball Adderley Legacy Band and for the Pat Martino Quartet. Rick has been coming to the Artists Quarter for much of the decade, even supporting vocalist Carole Martin on her most recent CD. He’s in the midst of planning his next recording, and personally I can’t wait. Rick is a creative improviser who seems equally comfortable playing the blues, ballads or hard bop barnburners; his voicings are rich, his quotes spontenous. And he always seems to have a good time interacting with his partners, this weekend Jay Young on bass and Kenny Horst on drums. Hearing Young on acoustic upright is always a too-rare treat.

Rick puts a light touch on his melody lines, surrounding them with dancing cascades of chords, throwing in licks of familiar fare in seamless junctures. Most appreciated this weekend were two solo versions of a Strayhorn/Ellington medley. The first night, the rarely played (and most elegant) “Single Petal of a Rose” gave way to a “Prelude to a Kiss” that soared as a prayer-like call and response among left and right hands; “Lush Life” closed the exquisite sequence. The next night, again solo, Rick reversed the order, “Prelude” again separating the more narrative “Lush Life” from the melodic “Rose.” Ben Webster recorded an outstanding “Rose” (on See You at the Fair) and we can only imagine a pairing of Germanson and Webster. The second night brought another medley with the full trio, this time a lively set of Monk (“Ruby My Dear,” “Pannonica” and “Blue Monk”). Maybe the hit of the second night was Rick’s own “Daytona,” a catchy, upbeat melody kissed by Latin rhythms, and the kiss became a bearhug once Kenny Horst turned rimshots to clave. Germanson is a pianist who reveres tradition while turning the past inside out with an ear tuned in global directions.

Which brings me back to Eldar, himself a product of global directions. Clearly a prodigy in his homeland, Eldar and family emigrated to Kansas City when he was in his early teens, and from that point on, he was on everyone's radar screen. After winning several awards, he became the youngest guest to appear on Marian McPartland's Piano Jazz. At about 18, he made his debut at the Dakota with a rhythm section of veteran players, bassist Marco Panascia and drummer Todd Strait. Even at 18, Eldar seemed to channel the mature chops of Art Tatum and Oscar Peterson with the youthful exuberance of a young Benny Green. His hands moved faster than the ear or eye could really appreciate and he was utterly fearless in his attack. All this remains three years later but add to his earlier prodigious approach a more direct integration of his own generation’s love of electronics, hip-hop and beyond. Add also a much younger pair of cohorts, his now regular bassist Armando Gola and drummer Ludwig Alfonso, appearing with him for the first time and hopefully not the last.
Eldar’s speed on uptempo tunes borders on the ridiculous but his articulation never suffers. And like Rick Germanson, one fleeting idea can touch off a string of new voices and/or trace memories from standard playbooks. His own compositions are interesting but the high point of his late set was a delightfully convoluted presentation of Miles Davis’ “Donna Lee.” The basic melody spun out of orbit early on, phalanges of notes and chords spewing out from the molten core to form their own little galaxies. Like his older counterparts in jazz piano, Eldar’s frequent grin confirms the joy that comes with the gift, and it is a joy of giving as much as receiving.

Thankfully, these gifts are shared.

Photos: (Top to bottom) Eldar at the Dakota (October 29th); Rick Germanson at the Artists Quarter (October 31st); Eddie Higgins (at his 2005 live recording date at the Dakota). All photos by Andrea Canter.
Posted by Canterjazz at 3:36 PM