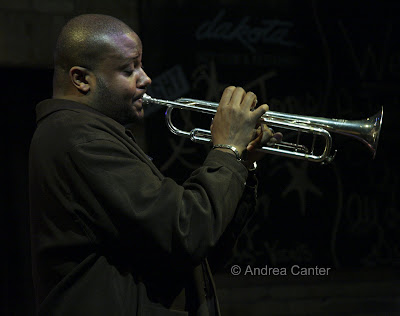 Once in a while an artist gives a performance that not only surpasses expectation but seems to transcend the art itself. Barely into his 30s, trumpeter Sean Jones has won over many fans in the past year in the Twin Cities, performing with his quintet at the Dakota in September 2007 and leading the Downbeat Rising Stars ensemble at Orchestra Hall this past spring. Without a doubt, his chops were consistent with his rep as one of the top rising trumpeters on the scene, and with his appointment as lead trumpeter for the Jazz at Lincoln Center Orchestra.

We were therefore pleased when it was announced that Jones would be the special guest artist for the annual “A-Train” Party tonight at the Dakota. The “A-Train” is a unique program that provides several levels of club membership, including tickets to national shows and other perks. We get advanced notice, priority seating, unlimited local shows and more depending on the dues level we select. In return, the Dakota has a guaranteed fund base and can count on filling a lot more seats for lesser known artists. It’s a win-win deal. Tonight it was far more—it was a private coronation. Tonight Sean Jones soared beyond his already-stellar reputation and exploded as a post bop supernova spewing showers of sixteenth notes and pepper sprays of trills, sliding and whining, shouting and whispering, and most of all, singing like a choir of Gabriels. He was devilishly fast and angelically sweet.

Without a doubt, Jones was backed by a rhythm section that would have well served Louis Armstrong or Dizzy Gillespie—Phil Hey on drums, Gordy Johnson on bass, and young Tanner Taylor (whom Jones nicknamed “T ‘n T”) on piano. But the show belonged to Sean Jones, whether he was burning through a long fuse on “Cherokee” or weaving an elegant tapestry on “In a Sentimental Mood.” Arguably the latter was the capstone of the evening, as Jones followed his exquisite opening solo with seductive juxtapositions of “Pure Imagination” and “If I Only Had a Brain.”