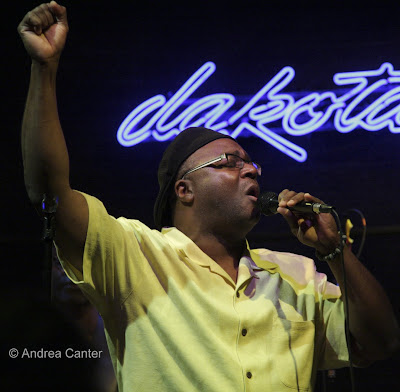 I wonder if Bruce Henry was a Cantor in another life. A real one, not like me. Maybe someone in my distant ancestry could really sing. After all, the original spelling of my family name was Cantor, not Canter. (It’s a long story...but maybe somewhere along it was determined that we did not possess sufficient vocal skills to deserve to be Cantors?)

But Bruce Henry would have made a terrific Cantor. Not just because his pitch is true and his multi-octave range can cover the demands of any prayer. Like the best Cantors, Bruce can summon the highest spirit with a simple incantation. And it matters little if that spirit is Judaic, African, or Bulgarian or if the origin of the call is Gershwin or Parker or folk tradition. No spirit would turn away from the unwavering sound, the pure tone, the thunder from the heart.

We can’t turn away when Bruce is on stage. His presence is simultaneously commanding and approachable. His joy is contagious. He nearly overpowers with emotion, leaving one breathless but still standing. When he improvises it’s as if creating a ceremonial chant from ancient fragments. His voice is his horn, and he can swing like Goodman, spin and spiral like Parker, or levitate like Coltrane.

And his home is now in Chicago, as it was throughout his childhood and coming of age. He’s returned to the Twin Cities often in the past few months for a variety of public and private gigs, but we’ll see less and less of him now as he builds connections on the Chicago jazz scene and tours in Florida with Joe Vass’s “The Soul of Gershwin,” a klezmer project. A klezmer project? Maybe he really is a Cantor.

Bruce Henry can’t stay away for long. He’ll perform at the Hopkins Center for the Arts in February and will open for Ramsey Lewis at Orchestra Hall in August.

Photo: Bruce Henry sent a call across the universe at his October 16th gig at the Dakota. (Photo by Andrea Canter)
Posted by Canterjazz at 3:27 PM