In the Shadow of the RNC, A Parlor Concert 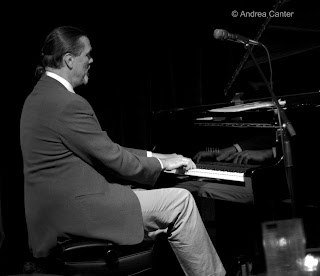 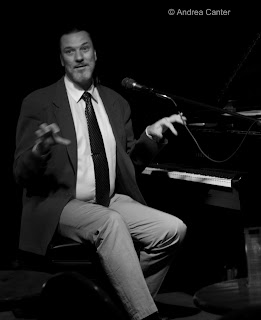 What if you could invite a favorite musician into your home to relax, chat about composers and compositions, and most of all, just play whatever came to mind? Add in a handful of like-minded friends? When Kenny Horst decided to keep the Artists Quarter open during the RNC, it was a gamble. Maybe he thought delegates and spectators would want some relaxation after a long night of speeches and spins? I missed what promised to be a political upheaval of sorts when the AQ booked outspoken maverick of guitar Dean Magraw on Labor Day night. But despite fears of security checks, detours or worse, I couldn’t miss a night with Jon Weber, surely one of the most talented, energetic and entertaining pianists around, the resident pianist for many Twin Cities Jazz Festivals, a recent transplant from Chicago to New York.

I was in the vast minority, however, for despite Jon’s wide following locally, there were no more than a dozen hearty fans (Democrats?) in the AQ Wednesday night, only a mere handful remaining after the first set. Of course when the first set really started was hard to pinpoint. What seemed like a sound check evolved into give and take with old friends in the audience, and soon Jon was demonstrating stride and offering little known details of the lives of the swing era songwriters. Fifteen minutes into his solo salon, the full trio with Gordy Johnson and Kenny Horst joined Jon for swirling renditions of "Take the A-Train," "Tiger Rag," "Swanee," and "Elmer’s Tune," and there was no tune without a story.

How did Harry Warren come to be called Harry Warren? How many quotes can you find in “There Will Never Be Another You?” How did Jon morph this into the national anthem of Iceland? By the time the tune is over, you forget where it started. Uncharacteristically, Jon could not name the composer of “Penthouse Serenade,” but then, neither could we. (It was the title track to a Nat King Cole album, attributed to composers Burton and Jason.) The beautiful Bill Evans tune, “Very Early,” was dedicated to John and Pamela’s 20th anniversary. Not able to leave well enough alone, Jon gave it a James P. Johnson treatment.

Jon talks almost as fast as his fingers move around the keyboard, his ideas tumble out of his mouth nearly as fast as his hands refashion the most common standard or the most quirky Monk classic. At the top of the second set, he goes solo again, “like Art Tatum playing Monk,” shifting from “Straight No Chaser” to “Blue Monk” to James P. Johnson again. “Has anyone ever heard ‘Going Back to Joe’s?’ He thinks he has stumped us but that particular tune is a favorite of Kenny’s mother-in-law, singer Carol Martin. She put it onto her last recording and sings it on New Year’s Eve and sometimes inbetween at the AQ. “What key should I play it in?” I suggest G-sharp, and he doesn’t blink.

The night continues with a discussion and demonstration of the themes from Mister Ed and Rocky and Bullwinkle, the former full of TV-land quotes and the latter in stride mode. A horse is a horse... a pianist is a pianist, unless of course the pianist happens to have an encyclopedic storehouse of jazz trivia that flows in tandem with ten of the most flexible digits in modern music, fingers tethered to the acrobatic mind of Jon Weber.

Of course Weber should play to a packed house. The fact that he could not draw more than a handful of his own fans was one of a list of crimes committed during the RNC. Fortunately it was one crime that is not likely to have long-term repercussions. Jon will undoubtedly return no later than the next Twin Cities Jazz Festival.

Meanwhile, my favorite memory of the RNC is sitting in the parlor, enjoying the congeniality and genius of Jon Weber.

Photos: Jon Weber hitting his stride and retrieving a few facts at the Artists Quarter. That purple jacket was not complimented by the yellow spotlight. (Photos by Andrea Canter)
Posted by Canterjazz at 11:36 PM