I'll Get Along Without Rossi's, Very Well 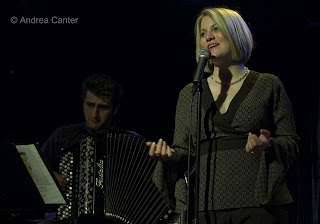 I hate to trash any venue that presents live music, particularly one that at least some of the time presents live jazz. But Rossi’s and its Blue Star Room are closing at the end of the month, so I don’t think I can do them any harm. And maybe my rant will lead to improvements at other clubs.

Rossi’s has been a fixture on the downtown night scene for quite a while. They were on 9th Street near Nicollet Mall long before the Dakota relocated down the street. Known as a basement steakhouse with a jazz room, Rossi’s was the only Minneapolis venue besides the Dakota to offer live jazz seven nights per week. And the room was built for music, unlike many of the area restaurants and bars that squeeze in a small stage or just a tiny corner of a room for music where none was ever anticipated by the architect. Rossi’s had a decent stage and piano, a sound system that at times was quite reasonable depending on who was manning the controls. When someone cared.

Caring about the music was not a consistent feature of Rossi’s. And its commitment went downhill. Often booking vocalists, a few years ago the manager informed one of our local songbirds that, while he intended to keep booking her, she needed to lose the drummer. “People can’t hear their conversations over a drummer.” Actually I thought it was more the other way around at Rossi’s—it was hard to hear even a drummer over the conversations around the bar and, when the place was busy, from just about any point in the dining room.

Back in the days B.S.B (Before Smoking Ban), it was much worse in many respects. The bar area was terminally smoky. The Happy Hour crowd was boisterous and there was always a group that stayed on beyond the cheap drinks and eats to wreak havoc on the listening environment far into the night. I remember coming in to hear Jeremy Walker one night, when he was still playing sax. It was just a duet with a pianist. No one, I mean no one, was listening. And that was no surprise, the music was far too sophisticated and instrumental for the leftovers of Happy Hour on a Tuesday night. I asked Jeremy why he bothered, and he said he viewed it as a paid rehearsal.

Paid rehearsals probably are the main reason the musicians kept returning to Rossi’s. Some, who had no trouble getting prime time bookings at better music spaces like the Dakota or Artists Quarter, didn’t return. Over time, it seemed that Rossi’s was booking more and more R&B and blues, less and less jazz. If it was jazz, 99% of the time, it was a very mainstream vocalist. After all, it is much easier to carry on a conversation over a vocal ballad than over a boppish riff. ASB (After the Smoking Ban), it was sometimes possible to enjoy a set at Rossi’s because the place emptied out after Happy Hour. But too often, even if there were no more than six in the entire room, there was still too much competition between bar patron and musician. If there was one person at the bar, he or she had to shout to the waitstaff. Hardly anyone noticed the music or applauded the effort. Paid rehearsal. But a paid rehearsal with lots of competition for the sound space.

Once in a while, Rossi’s brought in a national act, and often a big one—Cassandra Wilson. Spyro Gyra. Bobby Caldwell. Up-and-comers like Sara Gazarek. The prices tended to be higher than the Dakota and I hear the noise level was higher as well. Lately the big acts have been few and far between, and leaning more toward smooth jazz and blues. The weekend crowds dwindled as more sexy, more trendy downtown night spots pulled in the younger “see and be seen” set.

Tonight I stopped by Rossi’s for one last frustration. And only because hearing swinging singer Maud Hixson in duet with accordionist Patrick Harrison was too appealing to ignore, even if it was at Rossi’s. Even if the tiny crowd would nevertheless drown out Maud’s informative commentary about song origins and composer motivations. Even if the only applause was mine. Someone near the bar was paying attention for a while. He requested a tune they didn’t know so they substituted something similar. I don’t think he noticed their effort. He was too busy singing his version of a tune from an earlier set. Off key. But at least he had, on some level, processed the performance. He was in a tiny minority.

But the music nevertheless met expectations and then some. Mostly in a hot club vein (of course, this was accordion!), Maud particularly covered Irving Berlin and Cole Porter, drawing comparisons of their lifestyles and approaches to composition. The tunes were largely upbeat—this was not a setting for serious balladry. “Taking a Chance on Love,” “Dancing Cheek to Cheek,” “Dream Dancing,” “Fancy Free,” “What Will I Do?” and an appropriate closing of “For All We Know” should have drawn enthusiastic applause as is the case at most of Maud’s gigs. Few noticed when the song was over. Maud boldly sang several tunes in French, and predictably this was merely sophisticated sonic wallpaper. I, on the other hand, struggled to translate, recognizing that five years of high school and college French constituted a truly wasted education.

Maud swings effortlessly, embracing the lyric as well as the melody, and in the right setting, she can literally whisper on pitch. Even in the wrong setting, she gives each song her undivided heart. Patrick, recently returned from a trial run of the New York jazz and busking scene, was unperturbed by the Midwest midweek bar crowd, noting that the money he was paid tonight was far more than a similar gig would bring in the Big Apple, yet his rent was far less. He was happy to be home for a while. And we should be happy to have him back as one of the few jazz accordionists in town and one who can provide a big band world of swing with only ten fingers and a zillion cool buttons.

It’s not that I am happy we are losing Rossi’s and one of our very few fulltime, mostly jazz venues. But I am relieved that I won’t have to force myself to go into a space to hear music that is overpowered by oblivious conversations or feel guilty that I am avoiding gigs by musicians whom I respect and want to support. I hear that the very popular diner Hell’s Kitchen is moving in from a few blocks away, needing a bigger space for their burgeoning clientele. HK has not been a music venue and probably will not become one. But there is that nice stage and sound system. If they keep it, maybe they will be willing to respect it. I think Hell’s Kitchen would be a helluva a name for a jazz club.
Photo: Maud Hixson with Patrick Harrsion, playing for just about no one at Rossi's near the end of its run. (Photo by Andrea Canter)
Posted by Canterjazz at 12:31 AM