Three For All: Lomheim, Cox and Hey 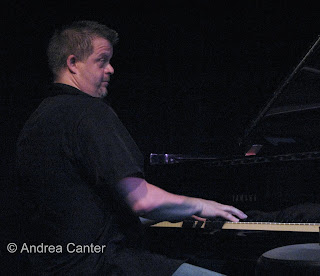 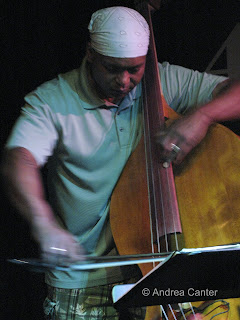 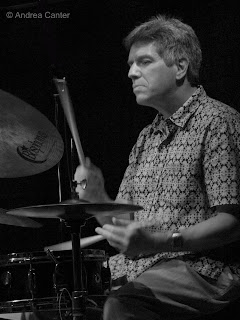 Recipe for a night of musical magic? Take one pianist with the touch of Bill Evans but a predilection for more rhythmic challenge. Add a bassist of international renown who reinvents lines and chords while never losing sight of the underlying pulse. Finally, mix well with a trapset master whose sheer elegance of time and motion disguises his creative and assertive compositional chops. Tonight’s key ingredients—Chris Lomheim, Anthony Cox and Phil Hey, three of the Twin Cities’ busiest and most effective jazzers who have proven their flexibility across contexts from bop to free improv, from comping for vocalists to heading their own projects. As a trio, they first came together about a year ago on the stage of the Artists Quarter, and this weekend they returned to the scene of that first fantastic voyage.

Both nights featured opening sets of about ninety minutes each, the half-dozen elongated pieces given ample time for the musicians to search, develop, explore and resolve without ever losing the attention of their audience or the intention of their music. Pieces as familiar as “Caravan,” “How Deep Is the Ocean,” and “Alone Together” were recast as modern discoveries; tunes as exquisite as “So Tender” (Keith Jarrett), “We’ll Be Together Again” (Fischer and Laine), and “Little B’s Poem” (Bobby Hutcherson) maintained their dignity amidst the trio’s musings and reworkings; and bop masterpieces like Powell’s “Sub City” and Hodges’ “Squatty Roo” exploded in multiple directions, the spatter to be reassembled, the tapestry rewoven.

Perhaps “Caravan,” the Tizol/Ellington standard that never seems to wear out its welcome, offered the weekend’s best example of spontaneous improvisation, three threads fitting together so effectively that it was hard to believe Phil Hey when he told me that the “arrangement” on Friday night simply evolved with no prior discussion. Assertive basslines and ambient piano tones led the way darkly, Chris lingering on the sustain pedal, Phil delving into his sonic library as he revved up his solo. Once I heard Phil present on the basics of percussion, and he commented that the listener should be able to identify the music simply by listening to the drummer. I figured he meant highly trained listeners such as other musicians. But had I walked into the Artists Quarter in the middle of his drum solo Friday night, there would have been no question that this was “Caravan” despite the fragmentation of the rhythm. The next night, Anthony opened the set with a long bowed solo that conjured a Schoenberg sonata wrapped inside a hard bop tune. Ten minutes later, “Caravan” emerged from the trio’s abstract wanderings, another spontaneous arrangement, this time continuing the journey into ballad territory. They say jazz is never played the same way once.

Saturday night also offered what might be described as a “Bop Sandwich,” two long extractions of “Squatty Roo” held together by a tossed salad of “Rhythm-a-ning” choruses, cleverly merging Johnny Hodges and Thelonious Monk. The quirky trend continued with a jagged run at “Alone Together,” an often-sung tune that in this rendition might have defied vocal effort. Gentleness returned with Bobby Hutcherson’s “Little B’s Poem” before the trio closed out the set with Phil Hey’s “Marse” ("short for 'Marser', idiomatic form of "Master" from the antebellum South," Phil tells me), its clangy dissonant chords and Anthony’s low-register hard-walking lines keeping the faith with the likes of Monk and Powell.

There were some young musicians in the audience. One day they will be on the AQ bandstand, keeping the faith with the likes of Lomheim, Cox and Hey.