Ears on the Future, Part One 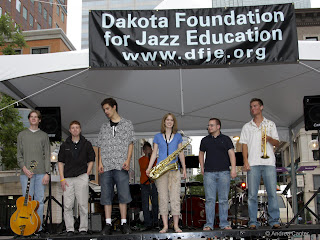 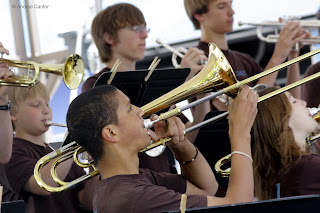 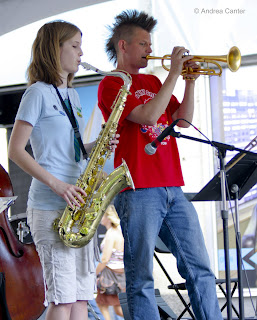 If you follow the often amazing youth jazz scene in the Twin Cities, you probably know that summer provides the best opportunities to check on our future investments, jazzwise. School’s out, and be it the middle and high school summer jazz camps or the often short-lived ensembles that come together as college students return home for a month or two, student musicians have no trouble finding each other to jam, or to more formally put together bands and find gigs. There are many outdoor venues, special events, festivals, etc. that are happy to bring youth and student bands to the stage.

The Twin Cities Jazz Festival has long supported aspiring musicians. Walker West Music Academy in St. Paul always has a slot at Mears Park for the first weekend of the festival. Usually the exuberant younger students take the first set followed by the more polished, more serious high school ensemble under the baton of master educator Felix James. I missed their set this year but many of the WWMA students and alums turned up the following weekend on the Dakota Foundation/MacPhail Student Stage on Nicollet Mall. After a few years you recognize particular musicians who have risen through the ranks of the local jazz schools and camps. By the time they graduate, many of these young artists have five or more years of performance experience. It shows.

On the Student Stage this year were two very impressive high school bands, from Roseville and Totino Grace High Schools. Their sense of swing, their interplay, and their soloing are all indicative of serious attention to jazz fundamentals couched in programs that promote a lifelong appreciation for the music, even for those whose formal efforts stop at graduation. The young man from TG singing a la Bobby Darrin was a showstopper. And I am always surprised and delighted by the joyful skills displayed by the youngest festival participants, the IAJE Mid Level (middle school) Jazz Camp band. Leader Eric Songer and his young charges whipped through some big band charts with swing in their horns and big smiles on their faces. It’s too cool to be 12 and blowing your sax out into the downtown breeze while dozens of perfect strangers (and a few family!) applaud and tap their feet.

Opening the student stage this year was the Minnesota Institute for Talented Youth (MITY) Jazz Band, led by director Scott Carter. Scott is no stranger to talented youth—he’s led MITY’s summer program for at least a few years but has also been the mastermind of the successful jazz program at Minneapolis South High. Just the night before on Peavey Plaza, three of his graduates (Chris Smith, Javier Santiago, Miguel Hurtado) joined with three other college musicians to open the Minneapolis segment of the festival as Neoterik, later holding down the stage at the Dakota for the festival late night jam. MITY includes a wide age range, and brings some students back year after year. On keyboards this weekend was Joe Strachan, finalist for the recent Dakota Foundation/Schubert Club Jazz Piano Scholarships. His technique and jazz feel are dazzling. We’ll be hearing more of Joe for years to come.

The closing two sets on Saturday night were the final performances of the Dakota Combo, second edition. By this evening, the metro-wide sextet (4 graduating seniors, two juniors) had considerable performance experience, having debuted at the Dakota Jazz Club in December (with guest artist Delfeayo Marsalis), performed at the gala opening of the new MacPhail facility, the Winter Jazz Festival, and the final Jazz Thursdays concert at MacPhail in May; and they had demonstrated their skills and jammed with students during a three-school tour in February. Ten months beyond that first rehearsal, they were a band that communicated, enjoyed each other’s talents and ideas, and ready to move on. Over the year of rehearsals under the direction of Kelly Rossum, their repertoire had expanded; their original compositions and arrangements had jelled; their comfort on the bandstand now flowed into easy-going commentary. Their skills? Tentative and cautious in September, the ensemble individually and in total expressed confidence, willing to take artistic risks, sailing freely through the playlist. Simple harmonies and practiced riffs had given way to more personal and complex explorations. The four graduates now head off to even more serious jazz studies at Stanford, New England Conservatory of Music, Columbia College of Music in Chicago, and St.Thomas University in St. Paul. And it looks like the third edition of the Combo will have veterans on bass and trumpet!

Sunday, in addition to Totino Grace, included two back-to-back sets organized by MacPhail Center for Music faculty. The first set provided opportunities for student “guests” while the second set featured the two finalists in the jazz piano scholarship competition. We were impressed with 13-year-old Austin holding down the keyboard for musicians three and four times his age. Stephanie Wieseler, graduating tenor sax player for the Combo, returned to the stage, first to trade bars with teacher Greg Keel, then side by side with Combo director Kelly Rossum. It was a rare opportunity to see Rossum engage one of his students on stage, as he typically keeps himself far away from the action, giving his students full latitude to make their own mistakes and learn their own lessons. But this was a special occasion and one both student and teacher seemed to relish as partners in music. Piano scholarship winners Joe Strachan and Jacob Wittenberg (also the Combo pianist) each performed a short set with the backing of MacPhail bass instructor Tom Pieper and Combo drummer, Matt Roberts. It was quite clear from their performances why the judges had such a difficult time selecting the winner of the competition in May! Jacob won the day, by an 8th note. Now Joe is eying the Combo’s piano chair. He’ll have big shoes to fill, but he seems to have big feet!

The Student Stage is not expected to draw hundreds or thousands. There are no concessions at 10th and Nicollet Mall unless you count sitting on the Dakota’s patio sipping martinis as a concession. A block down on Peavey Plaza, there are more amenities, lots of seating, a big stage, usually a couple thousand at any one time. But at each student set, most of the 80+ chairs were filled, listeners lined up along the sidewalk for a half block, and the Dakota’s patio tables were consistently full. Family and friends certainly account for some of the crowd, but not for the majority of the 120-150 who listened attentively, some dancing n front of the stage, and many looking incredulous that these musicians were only in their teens. And some barely.

It was the best possible advertisement for funding music education in our public and private schools.

(See Part Two, coming shortly, on the student-to-professional transition that played out recently at the Artists Quarter.)
Photos: Top, the final bow of the 2008 Dakota Combo; Middle, enthusiastic brass in the MITY band; bottom, Stephanie Wieseler with Kelly Rossum at the MacPhail Faculty Jam. All photos from the 2008 Twin Cities Jazz Festival by Andrea Canter.
Posted by Canterjazz at 5:10 PM