The Fountain of Haynes 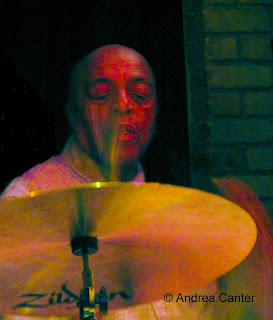 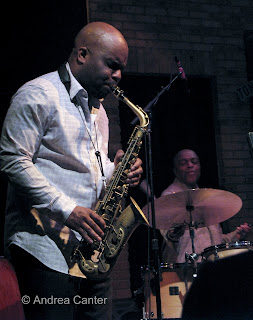 I think I first heard legendary drummer Roy Haynes live four or five years ago at the Artists Quarter in St. Paul. The AQ is not a typical stopover for artists of his stature, but Roy has a special relationship with AQ owner and fellow drummer Kenny Horst. He’ll bring his band into the AQ about every two years and fill the room for three nights of the most joyful bop magic on the planet. And the fact that Roy is 83 and still burning behind the trapset is the definition of “legend.” An alum of the bands of jazz titans from swing to bop and beyond (from Louis Armstrong to John Coltrane, from Miles Davis and Dizzy Gillespie to Pat Metheny), it might be Haynes’ influence on the future of jazz that will be his most significant legacy. Like another legendary drummer, Art Blakey, Roy Haynes has become the master baker fueling the rise of a new generation of stars, including two of the finest sax players of the 21st century, first Marcus Strickland, now Jaleel Shaw. The Roy Haynes Fountain of Youth Quartet – Haynes has about as many years alone as his three sidemen together—is one of the most consistent, high octane mainstream ensembles on tour and on record. In the Twin Cities, we’ve been lucky enough to have FOY in town twice in the past three months—at Ted Mann Auditorium with the Northrop Jazz Series in March, and this week, a rare stop at the Dakota Jazz Club in Minneapolis. It was an occasion to draw Kenny Horst away from his own club, serving nominally as “co-sponsor” but mostly just sitting back and enjoying the music with the rest of the nearly packed house.

There is a certain degree of predictability when the Fountain of Youth performs. There will be at least one tune by Thelonious Monk (“Trinkle Tinkle,” “Bemsha Swing”), and at least one or two from Pat Metheny (“Question and Answer” and, nearly every night, the band’s glorious rendition of “James”). Roy often uses “Summer Nights” as a closer; since his last recording, they bring the house down with a darkly delicious “My Heart Belongs to Daddy.” But there is always variety, from great songbook staples like “Autumn Leaves” and “Everything Happens to Me” to the best bop standards like “Body and Soul,” “Solar,” “Oleo, and more. And “Hippity Hop,” which Roy first recorded live at the Artists Quarter on Where As, is now a much-anticipated solo interlude.

That there are few surprises in the playlist is offset by the pure magic of the quartet’s interaction, the sheer enjoyment of their company, the soaring spirits that yield one passionate phrase after another. Haynes knows how to carry his 83-year-old pulse across two sets of nonstop drumming—yielding the floor frequently to his young sidemen, this time taking no prolonged solos until well into the second set. No one is disappointed—the Energizer Bunny of percussion never stops swinging the sticks (or mallets, or brushes), perhaps dropping back to a simple tickling of the rims while a soloist carries on, but never, never taking a break. And each tune gives the other musicians wide berth for setting up and carrying out their own explorations. Martin Bejerano should be as well known as Brad Mehldau or Jason Moran, and probably would be if flying primarily under his own name. Watch his fingers dance across the keyboard-- is it possible to sit close enough to see his brain spinning, spewing out ideas that seem to arrive fully formed? One moment he slides into a Latin bounce, the next minute a bluesy meander, back again to a hard bop cascade of arpeggios and hand-over-hand somersaults. He attacks the keys like a Shiatsu masseur. David Wong, who took over for bassist John Sullivan about a year ago, gave us a slippery double-time solo on “James” and generally mirrored his boss’s pace, at some point engaging each of his partners in a sympathetic duet. Alto/soprano saxophonist and award-winning composer Jaleel Shaw nearly stole the show, however, filling the air with sinewy climbs, glissando-like dives, songful ballads, and generally exhibiting the physical and artistic energy of his mentor.

Roy Haynes packs a lot of entertainment into his small frame. He never stops moving. If he isn’t stroking the skins with his brushes or pounding out intricate artillery rounds with his sticks, he’s jumping up and pacing behind the kit, adding a well-placed hit or cymbal crash. “Hippity Hop” was performed solo with mallets, and here Roy taught a master class in control, never rushing, letting the patterns develop, the decibels rise and fall, each sound telling its own story. The master class was not yet over—noting he was using a “Roy Haynes Signature” snare, he invited “any drummers in the house” to come on stage and try it out. Several responded. If I played drums, even badly, I would have jumped at the chance to climb on stage and take a swat at Roy Haynes’ snare.

The band was in town for just one night, jumping over from Madison before returning to New York. It was a “Summer Night” of pure “hippity hop.” And our “hearts belonged to Daddy” Haynes.