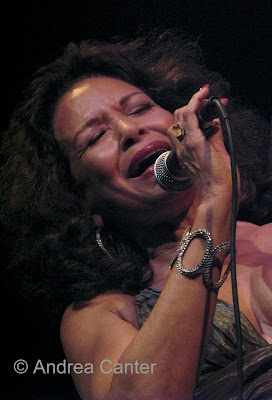 Sometimes I realize there is no point lamenting that we live in the Midwest rather than New York. True, if I was in or near Manhattan on any given night, I would have at least a dozen top-flight jazz clubs to choose from, and most likely at least 4-5 gigs that would really tempt me. And this does not include Carnegie Hall, Rose Hall, or any of the other major concert halls. Nor am I throwing into the mix Broadway and off-Broadway shows, dance companies, and the rest of the live entertainment scene. The Twin Cities pales in comparison. But as my mother says, you can only go to one thing at a time. And even here in the Twin Cities, conflicts arise almost daily—do I go to the KBEM jazz film series or to the Artists Quarter to hear the Phil Hey Quartet? Do I go to the Dakota for Bruce Henry or to the AQ for the Out to Lunch Quintet? Do I go hear one of my favorite singers at the Times or one of my favorite pianists at Crave?

Sometimes the conflicts are irrelevant: the local talent will be around next week but a touring artist may not return for a year, two years, maybe a decade. In the past week, the Twin Cities has welcomed the best voices in the business, if jazz is your business. Or even if jazz is something you rarely notice. First, Karrin Allyson came to town, as she tends to do annually, and gave us what was arguably her best show ever (see my blog for April 30). A few days later, Dianne Reeves filled Orchestra Hall. And Sunday night, the rarest treat of all, Freda Payne donned her jazz chops for an Ella Fitzgerald tribute at the Dakota.

I almost passed on Dianne Reeves. I love her voice, I love her song selections, but her last performance at Orchestra Hall was marred badly by poor sound. Sometimes the deep box that is home to one of the world’s finest symphony orchestras is nevertheless a sonically evil setting for a vocalist or small ensemble, and particularly for jazz. Voices are often over-amplified to the point of distortion, with the band vibrating as if in an echo chamber. I am too accustomed now to the intimate, near-perfect sound of the small jazz clubs on either side of the river (Dakota and Artists Quarter), yet many larger halls manage small groups and soloists admirably, such as Ordway Theater in St. Paul.

I decided to take my chances for two reasons: 1) I really like Dianne Reeves and she never performs in small venues; 2) lately, Orchestra Hall has been a contender for Most Improved Sound of the Year. The arrival of pops/special projects director Lilly Schwartz likely has a lot to do with it. But Reeves also travels with her own sound engineer, which can be a big plus or disastrous minus depending on how well that engineer works with the hall’s characteristics and sound personnel. On May 2nd, the sound was more than adequate, amplification was within tolerable limits; no distortion interfered with our enjoyment of what may be the most perfect vocal instrument in modern jazz.

Reeves just released an eclectic recording produced by cousin George Duke, When You Know. On tour she is backed by some of the musicians from the recording, including Brazilian guitarist Romero Lubambo, bassist Reuben Rogers and drummer Greg Hutchinson, along with pianist Peter Martin. Friday night she performed with the full quartet and in varying combinations. But most dramatic, most inspiring, was her a cappella rendition of “I Like the Sunrise.” When was the last time we saw a standing ovation in the middle of a set? Especially here in the land of “Minnesota Nice?” (That’s local lingo for our usually staid but pleasant Scandanavian exteriors, outwardly unflappable and rarely given to extreme emotional expression.)

Over the two sets, Reeves gave us a virtuosic demonstration of scat and vocalese, techniques that to some define jazz singing and to others simply interfere with the presentation of “real” lyrics. Not every jazz singer should scat—the substitution of sound for word should not be a mere afterthought to fill in space between verses or to wave a banner that screeches “I am a jazz singer!” Dianne Reeves uses scat as naturally as she uses words, as skillfully as a saxophonist blows riffs. And in doing so she makes full use of her own instrument, leaping across octaves like a sure-footed gymnast, executing accurate and graceful landings, sudden ascents and descents without once teetering off the edge of her destination. And she also fits her talent for vocalese (real words, but using her voice like another instrument) into her commentary and, at Orchestra Hall, into her introductions of her musicians. Starting “Our Love Is Here to Stay” with just Lubambo on stage, she vocalized her invitation to each of the other musicians to join her. But scat or straight, no matter, this was a night to savor a voice that exudes warmth and sweet joy, physical control and emotional freedom. Next time Dianne Reeves comes to town, I won’t hesitate for a second.

I hesitated for a few days after hearing that 70s R&B star Freda Payne would be bringing an Ella Fitzgerald Tribute to the Dakota. I remembered “Band of Gold,” her big hit of 1970. It was a great tune for the era. But it’s nearly 40 years later. And a far cry from Ella. But why not? It seemed like a fun way to cap the weekend. And she sounded great on the video clip we found on her website. Growing up in Motown, Freda Payne actually started out singing the songs of Ella in her teens. Both Berry Gordy and Duke Ellington wanted to sign her—but her mother wanted her to finish school. She went on to win the Ted Mack Amateur Hour, got her first job in New York from Pearl Bailey, and did some jazz gigs. Her connections to Detroit soon led her to a career in R&B. Over the next two decades she also acted on stage, film and television. Now she’s turned back to her first love.

At 65, Freda hasn’t lost her swing or her zing, her pitch is true and her enthusiasm for her material is infectious. Her show was worthy of the best of the 50s night club acts, from her sparkly long gown to her entertaining, as well as informative, commentary between tunes. She’s studied Ella on multiple levels, and while she does not really sound like Ella (although she often hints at Barbara Morrison, another mid-60s Ella interpreter), she has incorporated many elements of Ella, from her impeccable sense of swing to her smoothly flowing scat. It was a one-night gig and this was the second set—nothing held back. And it was a special treat to see two of the Twin Cities’ finest—bassist Gordy Johnson and drummer Joe Pulice—share the stage with this engaging performer, and so obviously enjoying the moment.

Most vocalists give the band a tune or two to “warm up” the audience, make their grand entrance, and take a break during each song, yielding some solo opportunities to the band while also resting the chops for a minute or two. Freda Payne came out with the band and never stopped. Not for 90+ minutes. Her “breathers” were her comments between songs. She’s svelte and youthful. Either her performance style keeps her fit, or her fitness allows her non-stop performing.

Opening the Ella Fitzgerald songbook is like plunging your hand into a deep treasurer chest and pulling out one gem after another. So did Freda, be it ballad, blues or uptempo romp, proving from the first tune that, indeed, “The Best Is Yet to Come”—energized swing on “A Tisket, A Tasket” and “The Lady Is a Tramp,” sultry on “It’s Too Darn Hot,” beguiling on “Miss Otis Regrets” and “Angel Eyes.” And the inevitable requests, saved for the finale, “Bring the Boys Home” and, of course, “Band of Gold.” In isolation these tunes bring back the disco energy of the 70s. Coming after 90 minutes of Ella standards, the energy was mythical.

Maybe we have fewer choices in the Twin Cities versus our coastal metroplexes. But I like the choices we have here. And sometimes we strike gold.


Photo: Freda Payne brought Ella to life at the Dakota on May 4, 2008. Photo by Andrea Canter.