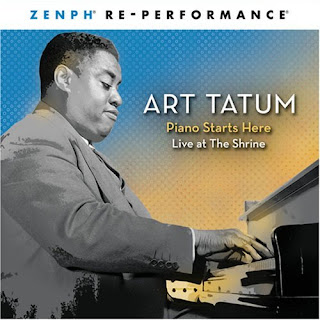 It has been said, only half in jest, that one of the hallmarks of improvised music in general, and jazz in particular, is that it is “never played the same way once.” The melody might remain intact, but each musician puts his or her own imprint on how that melody is presented and how ensuing improvisations take shape. Even if scripted, live music can’t help but differ each time it’s played, and that really holds true for traditional classical music as well as bop and beyond. No matter how faithfully the musician follows a score, each breath through a mouthpiece, each pressure from finger or forearm, each passing of the bow or plucking of the string will vary even if to a tiny degree. If it were otherwise, there would be little point to live music. We could just play one recording over and over.

Yet Sony Music and Zenph Studios have done the seemingly impossible—they are releasing a “live” performance of Art Tatum at The Shrine in 1949 (Piano Starts Here). Only this live recording was made in 2007. Say what? Since I am not a recording engineer, this will have to be the Techno-Wizardry For Dummies explanation. What I understand is this: Zenph has developed a process of reconstituting old recordings, in this case one that was damaged goods, by digitally capturing the exact rendering of the music, then replaying it through modern equipment, in this case a Yamaha Disklavier Pro Mark III Concert Grand placed in precisely the same spot on The Shrine Auditorium stage as Tatum originally performed, in front of a live audience. (This is termed a “re-performance.”) The result? An impeccable recording of Tatum’s artistry, complete with audience applause. The hype around this project is readily anticipated—we hear the “real” Art Tatum as did that audience in 1949, now with a record of every sound and nuance that defied capture and preservation six decades ago.

Is this really Art Tatum? He never touched a Disklavier. He wasn’t at the Shrine Auditorium in 2007. And if he had been able to jump into a Time Machine and show up for the gig, would Art Tatum have so perfectly matched Art Tatum? Would he have played such masterpieces as “Tea for Two” and “How High the Moon?” the “same way once?”

There is no doubt that the recording enables us to appreciate the speed, the delicacy, the dexterity, the inventiveness of one of the greatest musicians of all time in a way that perhaps is not really possible through Tatum’s existing discography. And if Tatum were somehow alive today, there is no doubt he would be playing and recording on equipment not even imagined in 1949.
But this is akin to taking an Ansel Adams negative from, well, let’s say 1949, scanning it digitally, and making a new print using the best of modern technology to restore contrast, highlights, shadows that surely were in Adams’ mind’s eye if not through his lens but impossible to reveal in print 60 years ago. Is it still an Ansel Adams photograph or an image based on Adams?

This brings up the dilemma, is it still art if it is imitated, no matter how skillful the duplication? Specifically in jazz, if the hallmark of the music is to be “in the moment,” is it still jazz if we faithfully recreate that moment?

We were all fascinated but also somewhat horrified by the arrival of Dolly, the first successful clone. Yet the stem cell spinoff has the power to save and improve countless lives. Medical technology may seem to be running ahead of our ethical and moral development, yet one can imagine how the creation of sheep or even a beating heart might enhance humanity through thoughtful application of progress.

I’m less inclined to consider the latest in sound technology as a major breakthrough that will benefit mankind. It’s intriguing but, unlike Art Tatum, it lacks soul and creation "in the moment." Those are essential characteristics of jazz. Music created in the laboratory is a marvel of engineering. Music created by musicians (acoustically or electronically, on the bandstand or in the studio) is a marvel of humanity.

If you are intrigued by the process or simply curious how Art Tatum might sound with the benefit of flawless recording technology, look for a copy of Piano Starts Here: Live at The Shrine on Sony.
Posted by Canterjazz at 10:21 PM