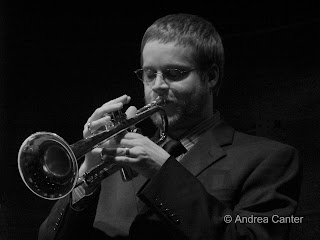 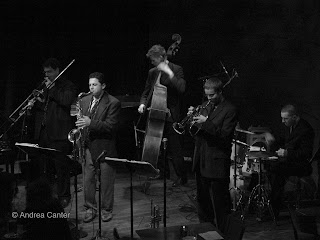 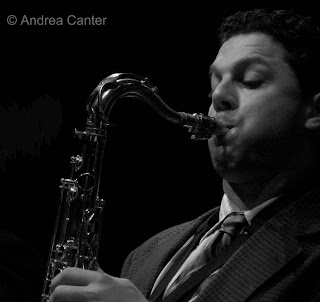 I’m not sure why I love brass ensembles. My first jazz record (courtesy of my father when I was about 9 or 10) featured swing trumpeter Jonah Jones. Why trumpet? I have no idea. But my next record was Al Hirt, so there must have been a brass connection early on. Much later I was a fan of the Canadian Brass, whether they were playing Mozart or Armstrong. And today I think the trombone has a strangely glorious sound, wonderfully demonstrated by local band Slide Huxtable.

It’s no wonder then that I am a big fan of Snowblind, an oddly named brass quintet of young Twin Cities jazzers. The front line features Adam Rossmiller (trumpet), Shilad Sen (tenor sax) and Scott Agster (trombone), all working on advanced degrees at the University of Minnesota while filling various roles in area bands. The pulse is provided by drummer Reid Kennedy, a recent U of M grad, and bassist Graydon Peterson, a product of the University of Wisconsin-Eau Claire jazz program and one of the busiest first-call musicians in town. Snowblind has been blowing around the Twin Cities for about three years, experiencing turnover only in the bass chair when Tom Lewis and then Peterson replaced original bandmember Mark Drehmann.

The guys already have two CDs on their resumes, Arctic Fury and Taking Shape, and they recorded the first tracks for number 3 last night at the Dakota. If their recent trajectory continues, this next recording will be volcanic. Three years ago, the band was already impressive with their original arrangements of tunes like “Night and Day” and “Night in Tunisia.” Without a chordal instrument, the harmonies are created via varying combinations of brass voices, summoning a crisp and elegant energy that can give you goosebumps or make you smile, often within a few beats. But over time, Snowblind has proven itself a caldron of new compositions, each member of the band contributing his talents to their growing and diverse repertoire. Taking Shape is entirely original works--one tune is bluesy, another a tropical funkfest, another a sweet, serene ballad. And as they proved last night, they are not above a bit of humor, initiating Livingston Taylor’s “Pajamas” with a verse of Brahm’s famous “Lullabye.” (Reid Kennedy, responsible for this arrangement, told me later that he remembered hearing Taylor sing this song about getting ready for bed when he was a kid, so it seemed logical to mesh with Brahms.)

Maybe part of the appeal of a brass ensemble is its character as musical amoeba—an ability to change the shape of its sound without losing the nucleus. Snowblind can conjure all formats from small chamber ensemble to Big Band with small shifts in harmonies and dynamics, the same nuances that transform waltz to samba to ballad to grooving dance to majestic march. Each musician has a distinct voice in his own right but it’s the sum total, the telepathic interplay that creates their unique sonority, five lobes of the same brain signaling hypersonic activity.

Together, they kick brass.