The Rise of Jazz Education, the Fall of IAJE 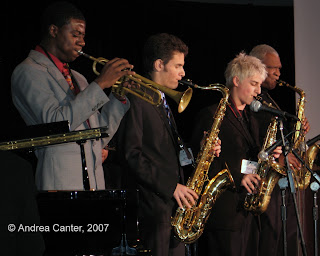 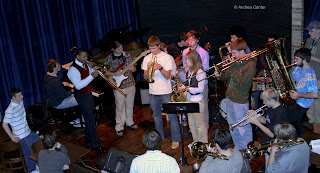 Jazz education seems to be in great shape. The extensive listings of jazz camps and jazz degree programs listed every year in Downbeat are certainly one type of evidence of the growing interest in serious jazz studies. Many festivals including Monterey and Atlanta have student-centered components that include selection of student all-star bands, scholarships and more. Locally, there are a variety of student music programs dedicated to jazz, from middle school and high school bands to independent programs such as Walker West, MacPhail, Twin Cities Jazz Camp, and McNally Smith College. Then there’s the Twin Cities Jazz Society which provides scholarships and frequent performance opportunities, and the Dakota Foundation for Jazz Education, which funds the all-star Dakota Combo, student stage at the summer jazz festival, and co-sponsors the Jazz Piano Scholarship Competition with the Schubert Club each year.

And until this winter, jazz education internationally seemed to thrive with the presence of the International Association of Jazz Education (IAJE), most visibly during their annual convention that drew 7,000+ educators, music students, performers, journalists, industry professionals and avid jazz fans. IAJE published a quarterly journal, provided resource teams to consult with musicians and educators worldwide, and sponsored affiliate state organizations. Really, IAJE did a whole lot more, and had plans for a whole lot more. But after two highly successful conventions back-to-back in New York City, attendance dropped sharply in 2008 in Toronto. Maybe that was predictable—travel outside the US is problematic for many Americans tied to university and school district rules about travel and limited budgets; the exchange rate was moving farther and farther away from even with the dollar; airfares soared between Toronto and many major cities. And the jazz scene just wasn’t New York---clubs were few and far between. About 4,000 came to Toronto. It’s one of my favorite cities but even I ended up canceling my reservation when airfare topped $500 and I realized how much four days would cost in American dollars.

IAJE took a big hit on the Toronto Convention, but this apparently was only one more financial setback for an association that was slowly imploding, plagued by a variety of ills that can beset an organization that is largely volunteer driven, under-funded, and perhaps not recognizing the need for restructuring. Today, IAJE President Chuck Owen informed members that IAJE had filed Chapter 11 and canceled the 2009 Convention, scheduled for Seattle, another wonderful city that often proves to be relatively expensive for travelers. In essence, IAJE has gone dormant. As the only national or international organization dedicated to promoting jazz education, the demise of IAJE leaves a critical gap. We hope that the remaining leaders can muster the energy and support to rethink the organization and plan strategically for its recovery.

Meanwhile jazz education moves ahead. Last night at Orchestra Hall, a brief opening set was presented by a high school ensemble mostly from the School of Recording Arts, a St. Paul charter school. They blew “Stompin’ at the Savoy” with more enthusiasm than any of the pros who followed—after all, this was their big moment, not another concert on the tour. Young trumpeter Caleb McMahon (who attends St. Paul Central High School and studies with Kelly Rossum) honored the subsequent tribute to Louis Armstrong with skill and passion, creating a joyful voice that deserved to share the stage with headline trumpeter Nicholas Payton. Lately, Orchestra Hall has presented student musicians in opening or accompanying roles as part of its new jazz series, and it gives the music community a wonderful opportunity to hear the fruits of jazz education—formal or informal.

Also yesterday, another group of high school jazz artists—the Dakota Combo—was featured on KARE 11’s Showcase, as part of a story about area arts programs and summer camps. The Combo (funded by the Dakota Foundation for Jazz Education and MacPhail Center for Music) has already performed at the Dakota Jazz Club, MacPhail’s grand opening gala, and the Winter Jazz Festival. Each member of the sextet has participated in his or her high school jazz program as well as various summer jazz camps in Minnesota and beyond. And there are many just within the metro area.

Earlier this week, Walker West Music Academy in St. Paul—the program that has been a launching pad for many successful area jazz students—hosted Delfeayo Marsalis, in town for the Louis Armstrong tribute at Orchestra Hall. It was an opportunity for some serious interaction between an accomplished artist and young hopefuls who learn and perform through programs at Walker West.

There probably will be no immediate fallout from the IAJE debacle at the local level—strong programs and local organizations will continue and hopefully expand their commitments. But jazz, and jazz education, are truly global; the music grew because its creators crossed boundaries of language and culture. Jazz thrives on its broad perspective and those who live it, teach it and support it need to revive an international entity to ensure its growth and vitality.
Photos: 1) Students from LaGuardia High School in New York performed at the 2007 IAJE Convention. 2) Delfeayo Marsalis and the Dakota Combo hosted an open student jam at the Dakota Jazz Club in December 2007. Photos by Andrea Canter.
Posted by Canterjazz at 11:54 PM