In the Spirit of Ray Brown 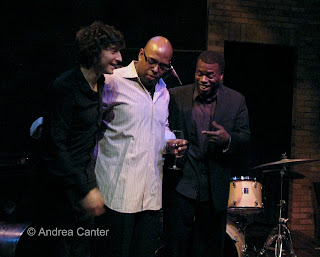 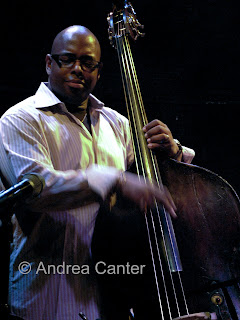 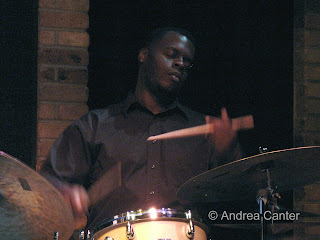 Sometimes a tribute gig really does justice to the honoree. It seems over the past few years, every other gig is a tribute to this or that legend, or the performers have come together as the so-and-so Tribute or Legacy Band, which of course makes every show a tribute gig. Of course there are some notable tribute ensembles, including the various configurations of the Mingus legacy bands; the Dizzy Gillespie Alumni All Stars; the Cannonball Adderley Legacy Band. Last fall I heard a fabulous new ensemble at the Iridium in Manhattan, in tribute to the great Wayne Shorter. Interesting, I can’t recall any Miles Davis or John Coltrane Tribute Bands—maybe the stakes are just too high?

On current tour, the legacy of the great bassist Ray Brown is reverently and joyously honored by three of his protégés, all monsters of their instruments—bassist Christian McBride, pianist Benny Green, and drummer Gregory Hutchinson. Green and Hutchinson toured with Brown in one of the last configurations of his trio, while McBride appeared with John Clayton in Ray’s Super Bass, one of the few times one heard three bassists together.

Ray Brown may be best remembered for his associations with Oscar Peterson and Ella Fitzgerald, but to younger musicians, his influence came at least equally through mentorship. Among the careers he helped jump start, count Geoffrey Keezer, Kareem Riggins, and Russell Malone along with Green, Hutchinson and McBride.

The Ray Brown tribute ensemble settled in for three nights at the Dakota recently, and the result was one of the most sympathetic and telepathic ensembles in recent memory, as well as one that was joyously swinging and soulful—in other words, a band in the spirit of Ray Brown. The music was ever-accessible and the musicians could not disguise their delight in the music and each other. The repertoire was largely tunes from Brown’s songbook, his compositions and favorite covers. Each of these consummate jazzmen took his turn introducing the tunes and telling favorite stories of their mentor.

Ray Brown had a sure but gentle way of setting the pulse, and most often that spirit prevailed at the Dakota, as on the band’s delicate reading of Neil Hefti’s “Lil’ Darlin’. McBride, whom I last heard in the very different context of the Pat Metheny Trio, added a beautifully intricate passage, and as a whole the threesome seemed to coax sound from their instruments while barely making physical contact. Benny Green in particular seemed to poise his hands above the keys as if merely the passage of air caused enough vibration to produce sound. Exquisite. “I like the pretty notes,” explained Greg Hutchinson. A similarly soft and poignant rendition of “Tenderly” was highlighted by McBride’s bowed soloing that so entranced the audience that dinner conversation in the adjacent dining room was audible i the club-- during a bass solo!

Hutchinson had high praise for his old employer, noting that “Ray was also a great person and to me that outweighs the great bass player.” He then introduced Art Blakey’s “Gumbo Hump” and seemed to take a few pages from the Jazz Messengers’ playbook, his choreography as much a visual feast as were his percussive antics a sonic buffet.

The trio was reminiscent of such simpatico gatherings as the classic Oscar Peterson Trio. Green, a significant protégé of Peterson as well as Brown, has incorporated much of the swing and virtuosity of the late legendary pianist with perhaps a greater palette of emotional colors. Hutchinson was crisp and physical throughout, as in his attack on Brown’s hard swinging “Captain Bill” (a salute to Count Basie), while McBride delved into his arsenal of acoustic sound effects to pull the most frin every pluck, every glissando. The trio’s interplay conjured an animated yet intimate conversation among close friends, where small changes in expression, gesture and eye contact signal significant moments of feeling and shared experience.

I saw Ray Brown perform several times in the late 1980s and 90s, including a couple times at the Jazz Showcase in Chicago and twice at the old Dakota in St. Paul. In July 2002, he died in his sleep after a round of golf, a few days before he was to return to the Twin Cities. But in late April 2008, he was back at the Dakota with Christian, Benny and Greg.
Photos: 1) Benny Green, Christian McBride and Greg Hutchinson take a bow at the Dakota on April 22nd. 2) Christian McBride at his most acoustic. 3) Greg Hutchinson was poetry in motion. Photos by Andrea Canter.
Posted by Canterjazz at 11:47 PM