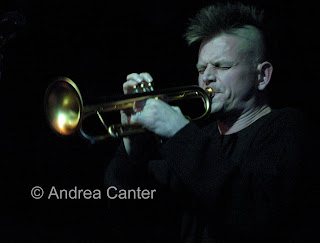 It’s been hard to keep up with the local jazz scene lately. But one way to ensure high quality experiences is to keep you ears on the “bouncing ball” – or rather the bouncing bell of Kelly Rossum’s trumpet. If you only followed one local musician for the past few weeks, Kelly would have taken you for quite a ride—the far-reaching original compositions he presented with his quartet at MacPhail in early February, the invigorating energy of the high school all-star Dakota Combo, which under his direction visited three area schools in late February; a return engagement of his combo at the Artists Quarter a few days later; the often haunting, always challenging, accessible yet avant garde sounds of the Ellen Lease/Pat Moriarty Quartet at Studio Z in St. Paul last weekend, and the arctic jazz blowout known as the Twin Cities Winter Jazz Festival, held for the first time at the new MacPhail Center for Music where Rossum heads the jazz program and provided artistic direction for the one-day event. And if that was not enough, this weekend Rossum turns up for the late show at the Dakota with two outstanding Houston-based guests, saxophonist Woody Witt and pianist Joe LoCascio.

Kelly Rossum keeps good company. His own quartet features a handful of the most creative (and accessible) musicians in town—make that any town. The bass chair fluctuates some, usually Chris Bates and sometimes Adam Linz, both of whom fit Rossum’s compositions and arrangements perfectly while bringing their own personalities into the mix. They both have a tendency to dance with their acoustic boxes, Adam usually adding a layer of vocalizing that seems to add rather than distract. In their hands, the bass solo is never an afterthought or mere interlude, but its own oratorio. Chris’ brother JT handles the drumkit with the energy and inventiveness that has made him one of the most in-demand musicians locally and expanding outward—he appears on Woody Witt’s latest recording, tours in Europe with the locally-based Fat Kid Wednesdays, and seems to turn up on stage whenever something exciting is brewing. The addition of young pianist Bryan Nichols has infused the Rossum Quartet with a daring and original rush of sonic pleasures, as Nichols has chops to match his expansive imagination.

My first introduction to the Ellen Lease/Pat Moriarty Quartet was just this past weekend when the band celebrated its first CD release with a crowd packed tightly into the oblong box of Studio Z in St. Paul’s Lowertown. The room maybe held 100 and there were perhaps 150 in attendance. When avant garde music is standing room only , you know something special is going on. Ellen and Pat teach in Roseville Schools—otherwise one can imagine them holding down regular gigs in New York at places like Stone and 55 Bar. As it is, their public performances are few and far between, one of the most serious crimes of local music. With Kelly Rossum, Chris Bates and drummer Dave Stanoch, the quintet evokes the creative spirits of Charles Mingus, Cecil Taylor and Eric Dolphy, the original compositions (most from Lease and Moriarty) swelling with orchestral power, ebbing with beautiful melodies, resurging with polyrhythmic motion, and always interweaving off-kilter yet aurally pleasing harmonies. Lease attacks and caresses the keyboard like another local hero, Craig Taborn, but in an all-acoustic framework. In fact the entire evening was acoustic to the point of no amplification at all—what we heard was solely the music as created on stage. I wished from my vantage point near the back wall that I could also see the music as created in the moment, particularly the antics of Dave Stanoch. So many sounds came from his corner of the stage, and examining the kit after the show, it was clear that he directed his own little orchestra, literally filled with bells and whistles, a pocket trumpet, and a large set of drums supported by a relatively small bass drum.

Kelly Rossum spent much of December in New York, catching a lot of music and sitting in. We were a bit worried that the never-ending opportunities would entice him to the city that never sleeps. (Perfect for Kelly who seems to never sleep himself.) But on his return, he confessed that he was happy to be back in the Twin Cities, because “it’s all here.” The quality of the music, the Twin Cities jazz scene, more than holds its own in comparison to the Big Apple. We have fewer venues, fewer musicians, a much smaller audience. But any night of the week, you can find music that is easily on par with the best of New York. Or anywhere else. And if you aren’t sure where to listen, just find Kelly.
Photo: Kelly Rossum at the Artists Quarter in February, photo by Andrea Canter
Posted by Canterjazz at 9:27 PM