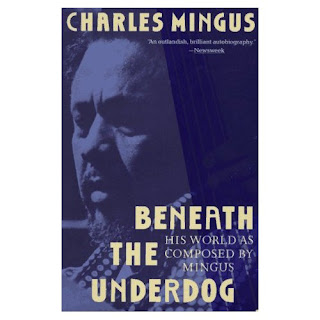 Kelly Rossum assigned Charles Mingus’ Beneath the Underdog as the first of four texts for Jazz Book Club at MacPhail this semester. It’s the only autobiography of the lot which otherwise includes books about Strayhorn, Coltrane and the Blues. We’re a group of nine adults so the fact that the Mingus book would carry an X rating from school librarians is irrelevant.

No one claimed to enjoy the book when we discussed it last week, and several readers had more extreme feelings about the way Mingus carried on about…. carrying on, as well as the quality of the writing and the relatively small amount of commentary related to his iconic status as a jazz artist.

On the other hand, I actually did like the fact that I had been “forced” to read it. Not that I found it particularly entertaining it but Mingus’s words, unlike the words of a typical biographer, have no equal in providing insight into the man and his music, explicitly stated or not. And Mingus is as complex a figure in music as one can find. No wonder his autobiography goes where no one else would dare.

About two parts Mark Twain to eight parts Henry Miller, and throw in a little Homer perhaps, Beneath the Underdog is clearly not an effort to accurately detail a life, but an eccentric, schizoid array of distortions and excesses that grew out of fear, anger and identity confusion. Mingus’s racial heritage was mixed and so were his feelings about race and inter-racial relations. He wasn’t able to really identify as white nor was he able to fully embrace an African American identity, yet he fell victim to prejudice from all sides. His fantasies from early childhood were warped by abuse at home and abuse (emotional if not physical) within the community. That he wrote about himself in the third person as if an alter ego perhaps reflected dissociation as much as a literary “trick” in which his rantings to his psychiatrist are jumbled with memoir.

About two thirds of the text are sexual fantasies presented as factual exploits, not exactly an innovative theme in 20th century literature and not particularly literate in presentation by Mingus. It seems to distract from the core elements of his story and frustrates our desire to learn more about his music. But it also allows the reader to move quickly—you’ve read about one sex act, you’ve pretty much read about them all. More important, taking it all as a whole, you really do learn a lot about the origins of the music. Like his strange and powerful fantasy life, Mingus’s music is big, energetic, multi-layered and challenging, both to play and (often) to listen. An orderly, linear mind would never develop such symphonic chamber works that swirl and spin off in all directions, works that feature dense phrases and spiraling themes, simultaneous dissonance and melody. Mingus used few filters in either life or music, somehow everything got thrown into the melee. And somehow so much of it makes sense artistically.

Reading what I soon realized had to be an exaggerated if not an outright hallucinogenic tale, I had to seek a more reality-based picture of Mingus. I found it in Gene Santoro’s My Life When I Am Real, an insightful biography drawing on both Mingus’s own writings and interviews with almost every major character from Beneath the Underdog. Santoro starts out by putting the autobiography in context, less we think that this was Mingus “when I am real.” But Santoro also makes it clear that the voracity of Underdog is not the issue but rather the documentation of disorder and genius. Together, both visions of Mingus give us a more rounded, three-dimensional view of one of the strangest, most prolific, and most gifted musicians of modern times. And for me, this viewpoint brings sanity and logic to the music of Charles Mingus.

Beneath the Underdog was strange reading, and I thank Kelly Rossum for making it—as well as several Mingus recordings--a part of my jazz library.
Posted by Canterjazz at 11:19 PM