Sophie Milman: From Russia (and Israel and Canada) With Love and Swing 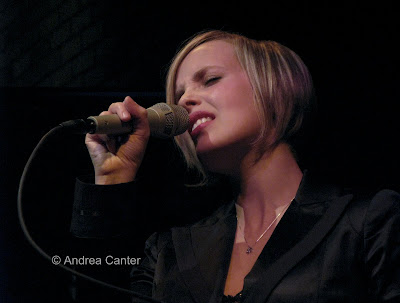 She sang a traditional folksong, turned a faux traditional show tune into a swinging delight, and reinvented a Sesame Street classic as a personal revelation. In her first set Tuesday night at the Dakota, Sophie Milman used three highly divergent sources to deliver an autobiographical sketch in song. A bold move for any vocalist, but Sophie, at only 24, isn’t “any” vocalist. Her control, presence, and particularly her interpretative sense transcend her youth by a generation.

Sophie explained that her life has been a cycle of cultural and social uprootings—first leaving her homeland in the Ural Mountains of Russia for the more extroverted environs of Israel at age 7, and then, finally comfortable in her adopted country, finding herself once again an outsider in a new culture, and yet another language, when, at 16, her family moved to the more sedate Toronto.

Thus her fresh and even painful interpretation of “It Isn’t Easy Being Green,” Kermit the Frog’s theme song from Sesame Street. Surely the frog’s creators, and songwriter Joe Raposo, never envisioned a young chanteuse taking the tune, and the theme of being different, to the level of a jazz ballad. Sophie and arranger Cameron Wallis gave Kermit’s refrain new life, new depth. Making a kid’s song an adult’s anthem—and one that works-- is no easy feat.

It may have seemed more logical that Sophie would choose to sing “Matchmaker Matchmaker” from Fiddler on the Roof, the beloved Broadway musical set in a small Russian Village, perhaps one not unlike Sophie’s native home. But Wallis’ arrangement was no showtune, nor was it a Russian folksong—Sophie and the band came out swinging…and with her tasty phrasing, Milman conjured sonic images of (now) fellow Canadian, Diana Krall, in a higher key. In fact I liked this live presentation much better than the track on Sophie’s new CD (Make Someone Happy), probably because at the Dakota there was no distracting harmonica.

On the recording, the traditions of Eastern Europe are conveyed through the very beautiful “Eli Eli (A Walk to Caesarea),” sung in Russian. For this set last night, Sophie selected a traditional, familiar Russian folksong which proved to be the most moving effort of the evening. There’s no doubt that Sophie lived within the lyrics, and no translation was necessary.

With only two recordings, and just a few years of public performing behind her, Sophie Milman is carving a unique musical identify—yes, I hear influences of Diana Krall as well as Ella and Billie in her phrasing, but her voice has a distinctive color and tone, and she brings a broad jazz vocabulary to each tune. This is a young musician who brings a wealth of personal experience and artistic intelligence to her work.

See review of Sophie Milman’s new recording on Jazz Police at http://www.jazzpolice.com/content/view/7522/115/ . Photo: Sophie at the Dakota on January 22nd (by Andrea Canter)
Posted by Canterjazz at 11:42 PM