Our First Lady of Song 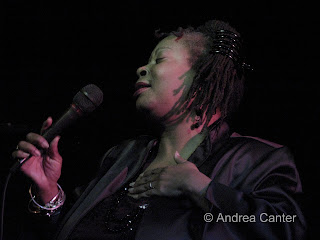 There’s no shortage of strong jazz vocalists in the Twin Cities, many who are natives of the area. But one of the most revered was raised in the shadow of Motown, eventually coming to Minneapolis by way of Los Angeles. Debbie Duncan was dubbed Minnesota’s First Lady of Song at least a decade ago, as well as Perpetually Outstanding Performer by the Minnesota Music Academy. She wears both mantles well, perhaps with even more elegance and sass than ever before.

Audiences love Debbie. She’s equal parts entertainer and jazz singer, making a few cracks about romance (or lack of it), sending the crowd (and it usually is a crowd!) into peels of laughter before stabbing at the heart with an emotive ballad. But she’ll end the set on an upnote—she can make you cry but she’ll leave you smiling every time.

Tonight at the Artists Quarter, she mentioned hearing Mark Murphy sing the opening verse to “My Foolish Heart,” already a gorgeous tune in its usual presentation. And she vowed that she would learn the verse soon, but tonight she only had the usual arrangement. But this is Debbie Duncan. There are no ordinary songs. As much as she can rock the house with a blues or uptempo burner, Debbie is a tender balladeer. She crawls deep into the lyric and slowly pulls it inside out. Three minutes later she’ll make you cry again—from laughing.

If you missed Debbie this weekend at the Artists Quarter, she’ll move across town to the Dakota on Tuesday night.

Photo: Debbie upstages winter gloom at the Artists Quarter. (Photo by Andrea Canter)
Posted by Canterjazz at 2:10 AM