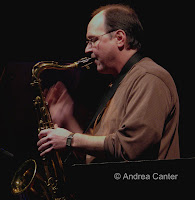 Even Bon Appetit has gone green with their latest issue, promoting recipes and restaurants that favor ecologically sound practices and organic and locally sustainable ingredients.

The jazz equivalents of “green” are those venues and patrons who support “good sound” practices and locally grown and sustainable music. In the Twin Cities we seem to be witnessing a broad-based rise in venues that at regularly present local music, albeit not always in “good sound” circumstances. Three relatively new restaurants are cases on point:

Crave, the slightly upscale and very eclectic newbie at Galleria in Edina which opened about a year ago in the old Sidney’s space. In addition to a platter of sushi, flatbread pizzas and a long list of other comfort and designer dishes, on Fridays (and some Saturdays) you will find some of the area’s top musicians squeezed into a 4-foot square staging area, hemmed in by fireplace on one side, booths on the other, backed by a wall and fronted by the only walkway connecting the bar and dining room. The space does not constrain the likes of Laura Caviani, Phil Hey or Lucia Newell, but the cobbled-together sound system is among the worst in town. But never mind, go early for the food and entertaining bartending, but stay late—when things quiet down, slide over right next to the music and you will be amply rewarded. It’s rather fun to sit that close a virtuoso pianist without being blasted out of the room.

Cavé Vin, an outstanding and affordable French bistro in southwest Minneapolis, recently added music to the menu on Wednesday nights. Along with frog legs, authentic onion soup, and daily specials of salmon, chicken and more, midweek patrons can enjoy three hours of sublime and swinging music from vocalist Rhonda Laurie, guitarist Reynold Philipsek, and usually Jeff Brueske or Matt Senjem on bass. Last month Rhonda made it a duet with guitarist Dean Magraw. One of the most sophisticated among local vocalists in her selection of tunes and interpretation, putting a hot club swinging spin on her repertoire has been both challenging and rewarding for Rhonda, and with Twin Cities Hot Club anchor Philipsek, the music goes well beyond the popular “gypsy jazz”, taking Django ahead a few decades, and delightfully so.

Café Maude, open only about six months, is another southwest Minneapolis hot spot. CM has dared to present not only a unique menu of food and designer cocktails, but at least weekly, some of the most ‘out there’ jazz in town, often musical fugitives from the Clown Lounge like Adam Linz, Chris Bates, Chris Thomson and Bryan Nichols, as well as Artist Quarter veteran guitarist Dean Granros. Sometimes on Wednesdays, always on weekends, check the schedule for current offerings. And reserve way ahead for dinner. For listening, however, come after 10:30 on Friday nights—by then the noise level and subsequently the acoustics will be tolerable.

Fortunately, however, you actually can eat your locally grown cake and hear it too with an ideal sound system at the Dakota Jazz Club in downtown Minneapolis. The menu has long featured organic local and regional produce; the high tech sound system was probably designed before the kitchen; and at least three or four nights per week feature area artists who would be high flyers in any metro zone—lucky for us, they live here. Tonight –with your locally grown potato-leek soup, heirloom tomato salad and Amish chicken breast—you could have heard a quartet of the best: leader Pete Whitman on tenor and soprano sax, pianist Laura Caviani, bassist Adam Linz, and drummer Phil Hey.

As area bands go, this was a dream team. Phil’s drum solo on “Alone Together” was a series of little experiments involving most of his percussive artillery; Pete’s sweet “Skylark” surely made Hoagy Carmichael smile; Adam swayed back and forth with his big box partner, always subvocalizing while his fingers danced across, around and over the strings, most engaging on his original composition “You.” (Or maybe it was “Ewe”?) Laura, in addition to her usual inventive bounce through Monk (in the first set, “I Mean You”), deftly challenged buddy Pete in the mad dash through Johnny Hodges’ “Squatty Roo.” While the audience did not necessarily make listening its first priority, even the chatty-kathys couldn’t help but notice the level of music on stage, applauding throughout—even after the bass solos. Maybe they realized that this Thursday night was as good, and green, as any in Manhattan.

And I can’t close this topic without mentioning the locally sustainable daddy of all Twin Cities jazz venues, the Artists Quarter. Tucked into a modest lower level bar, the AQ occasionally brings in some amazing out of towners, but it’s the locals who ensure the highest expression of modern jazz, at least six nights per week. The sound system is close to perfect and there seldom are any competing interests other than the music. And even when the music comes from farther away, it often has a local connection. This weekend, for example, don't miss home boy Bill Carrothers, now a resident of Michigan's UP and a touring artist in Europe, presenting the American debut of his epic, Armistice 1918. It could well be one of the nation's most signifcant jazz events of 2008. But the rest of the month includes such still-local heroes as Gary Berg, Phil Hey, Dave Karr, Phil Aaron and Peter Schimke.

As long as the AQ stands, we’ll sustain local jazz in the Twin Cities. And every Tuesday Night (with “Uptown Bill Brown” on B-3), it’s also certifiably organic.