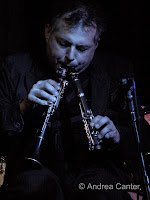 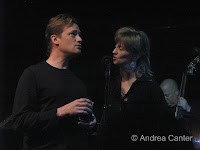 One of the biggest and most talented big bands in Twin Cities jazz crowded into the Artists Quarter last night—and that was just the audience. It seems unlikely that any other jazz was performed at other area venues given the many talented pianists, saxophonists, drummers and miscellaneous others who spent this Saturday night at the AQ in order to be part of the live American recording of Bill Carrothers’ Armistice 1918 project. Originally recorded four years ago in a Minneapolis studio for release on the French label Sketch, Armistice has enjoyed numerous stagings in Europe but, until now, none in the U.S. Sketch has since gone under, and its new owner in Japan declined to distribute or reissue this epic, inspired by the music and cultural impact of World War I. Maybe the first “great war” was not sufficiently hip to generate interest among marketing agents. It didn’t even garner a production from the Walker Art Center—too retro, too 20th century? The theme might be 1918, but the music is definitely of the 21st century where war is clearly not out of style.

The Artists Quarter was without doubt the right venue. On the second night, it was standing room only. The club was filled with the “usual suspects” as well as musicians who normally spend their Saturday nights on the other side of the mikes and monitors. Everyone wants to hear Bill, whose trips back to his native environs are too far and few between. He now calls the Upper Peninsula of Michigan “home,” but his touring is largely confined to Europe, where WWI is still relevant. He brought half the original band—wife and vocalist Peg Carrothers, cellist Mark Turner, percussionist and local pal Jay Epstein. The others were more than up to the task—hometown bassist Gordy Johnson (sporting a “new” rebuilt ax); Belgian drummer Dre Pallemaerts; and French clarinet/bass clarinet ace Jean-Marc Foltz.

Having listened to and reviewed the original recording only last week, I was surprised how much the music has evolved since its first release. Bill noted that it is different every night, but it is more than the improvisations that reinvent the music; the sequence of the segments, the list of compositions (popular tunes of the era as well as Carrothers’ originals), the transitions from one to the next--all have been modified to fit the mood of the musicians. And it has been condensed to some degree, fewer specific pieces yet more stretching out on those that are covered. But above all it remains a dark, epic tone poem that begins with the naiveté of the new (20th) century and proceeds through a call to arms, separation of loved ones, and the ensuing horrors of war, while those left behind kept “the home fires burning,” ultimately reaching the conclusion that they “did not raise my boy to be a soldier.”

Hearing this multilayered work is one thing, seeing it is another. Live, the dark moments (and there are many) are stormier, bleaker, louder, while the few bright moments are brighter and swing harder. Watching as well as listening, one is even more fascinated by the wild array of sounds that are created largely by the endless arsenal of percussion and the clever shenanigans of Foltz’ reeds. A DVD is needed to capture the source of the nonstop sound effects from Pallemaerts and Epstein, the former from within the trapset and the latter from a treasure chest of noisemakers, rain sticks, metal sheets, bowls, hanging cymbals and more. At one point Foltz dismembered his clarinet and added a mouthpiece to create two small instruments that he proceeded to blow simultaneously. Turner coaxed new whines and scrapes from the cello, and of course Bill was at times up to his elbows in piano innards. Over it all, the melodic and the catastrophic, Peg Carrothers’s soprano voice was miked with a slight echo, giving each effort an eerie hollowness that added tragedy.

As on the original recording, the music was alternately playful and funereal, bleak and majestic. And filled with Carrothers’ trademarks—lyrical, percussive, delicate, forceful, acrobatic, the ideas at times tumbling out of his fingers faster than our brains can process them. In a given verse, Bill often throws out snippets of multiple tunes, standards or even snatches of tunes that preceded or will follow. “There’s a Long Long Trail A-Winding” reappeared in bits and pieces throughout; even the Cole Porter classic “So in Love” surfaced in the midst of “I Didn’t Raise My Boy to Be a Soldier.” So much music lives in those fingertips.

It was not exactly what one would describe as an “upbeat” evening—the first set sliding into global tragedy, the second set filled with the clamor of battle and the inevitable flood of loss, and perhaps in a politically inspired revision, the displacement of “And the Band Played On” from its original position early in the epic to the afterthought of an encore. Yet there were the almost humorous moments, thanks to the oddly derived sound effects and clever insertions of melody fragments. And despite the dark theme, the caliber of artistry and international collaboration was as uplifting as any orchestral incantation. The genius and invention of Bill Carrothers trumps our darkest hours.
Photos: Top, Jean-Marc Foltz turns his clarinet into a "double reed"; Bottom--Bill and Peg Carrothers opened Armistice with a brief vocal duet rendition of "There's a Long Long Trail A Winding." (Photos by Andrea Canter)
Posted by Canterjazz at 10:54 AM