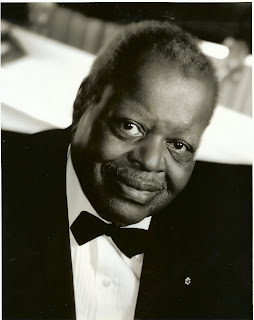 Since I was old enough to recognize that jazz pulled at me like no other music, I was a fan of Oscar Peterson. My father introduced me to Peterson when I was in my teens. I first heard him live at Jazz at Ravinia (outside of Chicago) in the late 1980s or early 90s, and I had the opportunity to see him perform twice in the Twin Cities, including his last visit in 2005. I own over 60 of his recordings, which is actually but a small sampling of his total discography. When I first heard his “Love Ballad” I thought I was hearing a magical improvisation on a Mendelssohn theme, not realizing until later that this was one of Oscar’s most beloved original compositions.

Peterson died last night at his home near Toronto, where the Montreal native had lived for over 50 years. He never succumbed to the gravitational pull of New York despite his early affiliation with the Norman Granz “Jazz at the Philharmonic” concert series or his numerous recording dates at major label studios. He remained true to his Canadian roots as well as to his approach to music until the end. As recently as November, despite recent health problems, Oscar had returned to writing his electronic journal, assuring fans that he was “back” and eager to maintain his relationship with his audience.

Peterson was a survivor. He survived an impoverished childhood, the son of a train porter who encouraged his five children to pursue music as a means of escaping poverty. He survived a variety of barriers reflecting American racism. He survived the bop, cool and fusion eras without compromising his own style. He survived a serious stroke in 1993 that weakened his left hand but not his musical spirit. Over the past decade or more, he also survived the physical challenges of severe arthritis, continuing to perform and tour through early 2007.

But it is the longevity of his talent that is most impressive. More modern in his approach than the swing-era pianists he most admired—particularly Art Tatum and Nat “King” Cole, yet more joyful and swinging than the bop-era pianists to whom he was sometimes unfavorably compared, Peterson ultimately became the one of the most influential pianists of his generation, and is often cited by young stars today as an early and significant source of inspiration.

Why is Peterson’s appeal so universal? First, the music swings so hard you can’t help but tap your feet. Oscar put the movement in “rhythm.” Second, be it a standard or original tune, the tune is paramount. A melody that might be easily forgotten in the hands of another musician would become a classic in Oscar’s hands. His own melodies—“Tenderly,” “You Look Good to Me,” and of course “Love Ballad”― simply “make you want to sing” as Ella Fitzgerald once said of her long-term collaborator. And despite his star status, Oscar led his trios and quartets as a true collaborator, giving his bandmates plenty of space to reveal their musical personalities while developing a distinctive ensemble sound. And that sound was so lush, so celestial, so powerful that you often forgot that only a formidable technique could sustain it. Oscar made it seem so effortless. The music just flowed from his fingertips.

In 1996, Peterson told an interviewer that “There's an extreme joy I get in playing that I've never been able to explain. I can only transmit it through the playing; I can't put it into words." Neither can I, but I hear that joy whenever I spin an OP recording, be it his early “songbooks” or his final original release, Trail of Dreams. His rich and extensive discography ensures us that the trail will never end.
Photo of Oscar Peterson by Edward Gajdel. See full obituary at http://www.jazzpolice.com/content/view/7468/79/
Posted by Canterjazz at 5:10 PM