From Louis to Jake: Jazz Is Alive 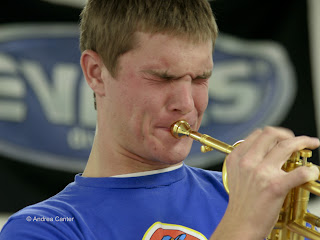 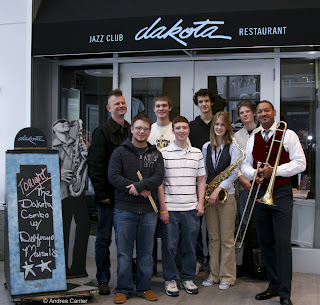 Like many of us who spend a fair amount of time listening to music, as part of our work or just as part of our daily lives, I often hear a melody or a specific rendition of a tune echoing from my “internal” CD player. Subconsciously, the brain records music and activates the playback button. This is not always pleasant or convenient, but usually I can trace the origin of this “recording” to my initial experience of the music, in live concert, on a new CD. The brain’s selectivity may not always seem rational but it is not random either. When the music runs through my head throughout the day, I know I’ve had a cosmic encounter—with a composer, a performer, an arranger.

This morning, my internal stereo is replaying “[When It’s]Sleepy Time Down South,” a tune long associated with Louis Armstrong, written by Clarence Muse / Otis Rene / Leon Rene, and to which Armstrong, Billie Holiday and Dean Martin have added lyrics. But it’s not Armstrong’s recording dancing in my head, nor subsequent versions by such acclaimed artists as Dizzy Gillespie, Clark Terry or Wynton Marsalis. I’m hearing Jake Baldwin. Jake’s a junior at Minnetonka (MN) High School and trumpeter with the current edition of the Dakota Combo, a select sextet of Twin Cities’ high school jazz students. Last night, with guest artist Delfeayo Marsalis on stage and with combo director Kelly Rossum ecstatically nodding his approval from a dark corner of the Dakota Jazz Club mezzanine, these very serious teen musicians challenged any notion that “jazz is dead.”

A relatively new project of the Dakota Foundation for Jazz Education and the Minneapolis-based MacPhail Center for Music, the Dakota Combo is one of a number of area programs that fuel the future of jazz, not just locally but on a national level as well—“graduates” of programs such as the Minnesota Institute for Talented Youth (MITY) jazz band, Minnesota Youth Jazz Band, Walker West Music Academy, Twin Cities Jazz Workshop and MacPhail, as well as area high school jazz bands and the first alums of the Dakota Combo, have moved on to the Brubeck Institute, Berklee College of Music, Manhattan School of Music, Oberlin…..and to careers in New York as well as closer to home.

In its second year, the Dakota Combo holds auditions and begins a series of rigorous rehearsals under Kelly Rossum’s guidance, preparing for a truly professional gig on the weekend, prime-time stage of the Dakota Jazz Club, with additional performances and school visits planned. For many of these musicians, all veterans of school bands and elite summer programs like MITY, the Combo offers the first significant opportunity to work with a small ensemble, where improvisation, soloing and arranging rapidly accelerate their development as jazz artists. An important component is the guest artist, who comes in for intense rehearsal, a public student clinic, and the featured performance. Delfeayo Marsalis proved to be an ideal guest, engaging a large group of mostly middle school and high school student musicians in a Saturday morning clinic and taking the sextet through a constructive critique.

I observed the Friday afternoon rehearsal, about a month after sitting in on an early rehearsal at MacPhail. I remembered Jake from the first rehearsal—I had not heard a young trumpeter with such a confident, clearly articulated tone. Now, on the eve of the Combo’s big gig, Delfeayo took the students through much of the planned program, including “Sleepytime Down South,” Jake’s featured solo. It seemed to go well but Delfeayo felt the final chorus needed work. Jake probably ran through a dozen variations of embellishment, each sounding more interesting and more majestic than the last. Wow, what is this going to sound like tomorrow night?

Saturday night, the program as a whole was strong; by the second set, everyone seemed relaxed and basking in the warmth of the audience’s reception and Marsalis’ enthusiastic support. Jake’s “Sleepytime Down South” –with a knock-em-dead final chorus – was worthy of a musician twice his age. And he was in good company. Stephanie Wiesler on tenor sax, Jacob Wittenberg on piano, Geoff Lacrone on guitar, Corey Grindberg on bass, and Matt Roberts on drums combined to demonstrate the breadth and depth of jazz talents in the Twin Cities, to show off the value of investing in youth music programs. The audience was filled with friends and family, but also with the usual Saturday night patrons who, for their $12 cover, not only got a chance to hear one of the premiere trombonists in modern jazz, but to hear six voices of the “shape of jazz to come.”

Already, my internal recording studio would welcome the work of any of these musicians. And soon, I’m sure we will be hearing from them in a more public forum. Jazz is alive, and will remain vital as long as young musicians, and the programs that support them, thrive.

Photos of Jake Baldwin and of the Combo by Andrea Canter.
Posted by Canterjazz at 11:28 AM