American Made: Jazz Informed by Poetry Housed by Opera 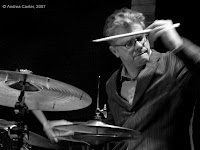 Jazz does not require a dark club setting to be sophisticated and cool. For example, you can hear great jazz in a small Japanese hotel in Manhattan, the Kitano. With room for 35, the performance space adjacent to the bar allows for the most intimate relationship between performer and audience, as well as a side of sushi.

Here in the Twin Cities we have our own unique spaces. On Friday night, we heard a fusion of jazz and poetry in a space that normally serves the Minnesota Opera Company. The MOC and Jeremy Walker’s Jazz Is Now project joined forces to cosponsor one of the more unique ensembles in jazz, Matt Wilson’s Carl Sandburg Project. About five years ago, Wilson’s quartet was one of the headliners at the short-lived Brilliant Corners, the experiment in small club jazz headed by Walker, who has since lived from grant to grant in trying to keep Jazz Is Now afloat. The Sandburg Project marked the beginning of JIN’s revival as a purveyor of original and experimental music; its Nownet (so called as it will sometimes be a Nonet, but you never know…) will return to public performance next fall.

The MOC stage in the lower level of a warehouse district building proved to be a fine match to the compositions of one of the most creative percussionists in modern music. The lighting was bright enough to allow the audience to watch Wilson’s impromptu choreography and gleeful expressions when the ensemble sound pleased him, which was often. The sound was surprisingly clear and well differentiated considering this was, after all, a warehouse basement. The tones emanating from Ben Allison’s bass—first turned toward the back wall, later perpendicular to the front of the stage as he essentially straddled his instrument as if mounting a bicycle—resonated with the mood of the Carl Sandburg poem of the moment, liquid as “Soup,” ethereal as “Fog.” Dawn Thomson played guitar and added an interesting, sometimes compelling layer of vocals. And no matter where Jeff Lederer took his sax or clarinet, in staccato honks or anguished moans or soaring spirals, not a note was lost to underground acoustics. We heard it all.

But visually and aurally, the most fascinating musician was Matt Wilson, a shirttail relative of Sandburg and fellow small town Illinois native. Attracted to the words and cadence of Sandburg’s poetry, Wilson created his own poetry of sound and motion, using not only arms and legs as do most jazz drummers, but elbows and fingertips as well, and facial expressions that seemed to coax additional layers of crackle and pop. He doesn’t limit the hi-hat to opening and closing—he makes the whole apparatus vibrate. I’ve seen him put his foot on top of the snare but not tonight.

All together, the Carl Sandburg Project honored the poet by conjuring both the hustle of urban life and the slower moving rustic charm of Mid-America. That they did so using the jazz idiom on an Opera Company stage in a warehouse setting is unquestionably American, undeniably Matt Wilson, and surely blessed by Sandburg himself.

Photo: Matt Wilson in an early 2007 gig at the Dakota. (Andrea Canter)
Posted by Canterjazz at 3:03 AM