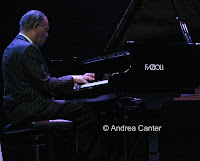 You’d think after four days of jazz in Manhattan that I would be ready for an aural vacation. Not at all. Sometimes I think that the experience of the modern era’s epicenter of jazz (and perhaps most other things cultural and gastronomic as well) enhances one’s sensitivity to future encounters. I can hear one great band after another in New York and return home to the Twin Cities primed for even more. Fortunately in the past ten days, neither the Big Apple nor the Mini-Apple fell short.

In New York—in Midtown to be specific—for the inaugural Jazz Improv “Convention & Festival,” I enjoyed live jazz as I have never been able to at the much larger IAJE (International Association for Jazz Education) convention. The quality of the music was at a similar (galactic) level but 700 or so jazz fans trying to find a seat in a 1000-seat ballroom is far more inviting than when thousands are lining up for the same available seats. In fact, when IAJE comes to New York as it often does, my evenings are generally spent in the clubs. For this relatively small confluence of jazz fans and musicians, the evening programs were easily accessible to all, and the music was mythical. Over five hours in one evening alone:
· Geri Allen, with her trio and special guest, tap dancer Maurice Chestnut. Allen proves that women can command as much power at the keyboard as their male counterparts, and the additional element of tap provided a visual component to improvisation, as young drummer Kassa Overall engaged equally young Chestnut in multi-media “trading fours” breaks.
· Jimmy Heath Big Band. Spry octogenarian tenorman, composer and bandleader Jimmy Heath managed a New York herd that featured the hot Jeb Patton on piano and sublime Lewis Nash on drums, pleasing the crowd with his tribute to Coleman Hawkins (“The Voice of the Saxophone”) and “Project S” which, as he told the audience, “that means Swing!”
· McCoy Tyner Quartet. If the great McCoy—percussive and rhapsodic as ever--wasn’t enough, consider the polyrhythmic pulse and dynamic contrasts of drummer Jack DeJohnette and the ever-surprising acoustic bass of Stanley Clarke, joined tonight by the soaring alto and soprano sax of Gary Bartz.
· Pat Martino Quartet. By the last set, the music was nearly 90 minutes behind schedule, but who was leaving? One of the modern monsters of jazz guitar, Martino kept us all awake with help from the marvelous Rick Germanson on piano, Paul Gill on bass and Scott Robinson on drums. Germanson mentioned he was not thrilled to follow McCoy Tyner but this frequent visitor to the Artists Quarter had no reason to worry. He has his own sound and deserves the spotlight.

The rest of the two-day event was hardly hit and miss—several ensembles from the Manhattan School of Music, modern romantic saxman Don Braden, the always-exciting and inventive Frank Kimbrough, the choreographer of bass, Avery Sharpe, the dynamic and timeless Roy Haynes and his young lion quartet, the effervescent Womens Work Quartet led by Judi Silvano, the avant creativity of young singer/composer Katie Bull, the global grooves of Ralph Ravello’s Intercontinental Express… And then there were my two club nights that bookended Jazz Improv: a truly magnificent big band tribute to Wayne Shorter, led by David Weiss and featuring Wallace Roney at the Iridium; and Steve Turre’s “Keep Searching Ensemble” featuring vibist Stefon Harris and the unique Akua Dixon, who plays a mean jazz cello and sings a down and dirty blues (not at the same time!) on stage at Dizzy’s Club Coca-Cola.

Back in Minnesota, a more relaxed pace? My ears were primed, and for the next few days I enjoyed Al DiMeola’s World Sinfonia at the Dakota and two back-to-back nights of Laura Caviani—with her trio and the always-inventive vocals of Lucia Newell at the unlikely (and often acoustically challenged) Crave Restaurant in Galleria; and a Saturday night with her trio and the majestic voice of Carole Martin at the Artists Quarter. And in between Al and Laura, I sat in on an early rehearsal of the new edition of the Dakota Combo—six of the area’s most talented young jazz artists led by Kelly Rossum and cosponsored by the Dakota Foundation for Jazz Education and MacPhail Center for Music. Their first public gig will be December 1st with guest artist, trombonist Delfeayo Marsalis. But the real stars are these 16-17 year-olds who already have some of the key ingredients to long-term success in this business—open ears, self-discipline, and that inner joy of creating music. Sometime I’ll be in New York watching a band and remembering when I first saw that trumpeter, that pianist…

There’s never too much jazz, wherever you live or wherever you visit.
Photos: 1) The 2007-08 edition of the Dakota Combo after rehearsal. 2) McCoy Tyner cut loose at the Jazz Improv Convention in New York. (Photos by Andrea Canter)
Posted by Canterjazz at 11:28 AM