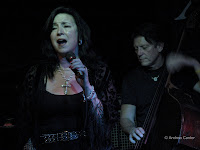 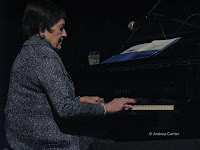 Jazz is not dead. In fact, for some of its finest purveyors, jazz is not only alive but it seems to ensure their personal longevity.

Recently I came across an article about Marian McPartland, soon to celebrate her 90th birthday. The Britain-born pianist has been broadcasting her acclaimed “Piano Jazz” series for nearly 30 years on NPR, a series of interviews and duets with a diverse list of guests from Oscar Peterson to Steely Dan. Not content with radio performance, Marian still can be seen live on stage, noting that even her arthritis seems to disappear when she touches the keyboard. And throughout her career, Marian has been known for her long-standing committments—an 8-year run at the Hickory House in New York, over 50 recordings for Concord and, of course, the longest-running program in NPR history.

A few months ago I attended a concert by the Dave Brubeck Quartet at a small theater in Santa Rosa, California. The 87-year-old pianist has outlived his original quartet, but has now been working with this current ensemble for over a decade—already a longer-standing collaboration than most groups working in jazz today. On this occasion, Dave had a slight limp, the remnant of a leg infection earlier in the year. But there was nothing slight about his music which has retained all of the beauty, all of the invention and most of the speed that has defined his career. And he entertained his audience with a few stories about his recent gigs, situations where the feats of an octogenarian pianist had apparently startled the critics. So perhaps did the release of a new recording a few weeks earlier.

In New York recently I saw performances by the Roy Haynes Quartet and the Jimmy Heath Big Band. Roy’s “Fountain of Youth” band is aptly named, not only for the three 20-something musicians who Roy has nurtured into one of the tightest small bands in modern jazz, but for master Haynes himself who, at 82, knows no limits to time, in tempo or in life itself. Jimmy Heath had just celebrate his 80th but, on stage, saxophone in hand and leading a large ensemble of largely up-and-coming New York musicians, he was a brash and exuberant leader who dared the youngsters to keep up with him.

Here in the Twin Cities, we have our own jazz survivors: There’s 88-year-old Irv Williams who, in addition to blowing his tenor sax every Friday night during the Dakota’s Happy Hour, has released three recordings in the past three years despite some health challenges. Frank Morgan has proven himself a survivor several times over, from his battle with drug addiction that derailed his career for nearly 30 years to his resurgence as one of the most eloquent altoists of his generation—a generation he apparently intends to outlive and outplay as he roars through his eighth decade. And then we have Jeanne Arland Peterson, who probably did not even notice when she passed 80 a few years back, but continues to play the piano with the power and finesse that has entertained Twin Cities’ audiences through a career in radio, baseball, and as head of Minnesota’s “First Family of Music.”

But perhaps the most amazing story of survival in jazz is that of another, much younger Peterson. This past weekend, Jeanne’s daughter Patty celebrated a special birthday with a gig at the Artists Quarter, the singer backed by mom on piano and brother Billy on bass. Nothing unusual about that, and Patty told the audience that this was not one of those “big birthdays,” the ones that end in a zero and make us shudder and count the new wrinkles. For Patty, this birthday was the miracle, the one that followed the ruptured aorta last February. Few survive such a medical catastrophe. John Ritter didn’t. Patty somehow managed her own 9-1-1 call. The fact that she lived to celebrate another birthday was remarkable. The fact that she was singing on the Dakota bandstand four months later was mythical. She sounds better than ever.

Jazz, and music in general, has survived many challenges in terms of adapting to changes in culture and technology, finding an audience, and attracting new pools of talent. Jazz musicians, as well, have survived many challenges to their longevity—the “ordinary” battles of mortality, the fatigue and frustrations of travel, the ups and downs of self-employment, the struggle to maintain chops as years of use and abuse accumulate and, for a disproportionate number, the tragedy and displacement of Hurricane Katrina.

Yet jazz historically has been about surviving and rejoicing. As consumers, we used to dance to the music; now we sit back and listen, as Ornette Coleman said, “dancing in our heads.” For those who make the music, it’s hard to tell if it is their survival keeps jazz alive, or if it is the music that prolongs their survival. Surely music keeps the planet spinning.
Photos: (L) Patty Peterson with brother Billy at the AQ. (R) Jeanne Arland Peterson. (Photos by Andrea Canter on November 17, 2007)
Posted by Canterjazz at 11:58 PM