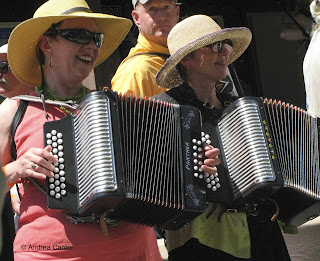 In the past year or so the accordion has been haunting my jazz listening. Yes, the resurgence of hot club music (aka “gypsy jazz”) has created a lot of work for local squeeze box talents, notably with the Parisota Hot Club and Café Accordion. But the accordion is also popping up (bellowing out?) in mainstream modern jazz and the avant garde. Gary Versace, not content to handle the common keyboards, brought along the accordion for his gig at the Dakota with Matt Wilson’s Arts and Crafts last winter. Curtis Stigers’ latest recording features Larry Goldings on accordion on several tracks.

The Walker Art Center’s World Jazz series recently featured Norwegian accordionist Froda Haltli, who shattered all remaining stereotypes about the instrument, using it as his own personal orchestra that pretty much negated the need to involve his cohorts on clarinet and Hardanger fiddle, although they came along in the back seat for some added color and intrigue; more involved with often peculiar results was vocalist Maja Ratkje, who seemed to compete more than complement her husband’s accordion.

And last weekend, friends hosted a jazz accordion party, a gathering of curious listeners who were treated to the boppish and swinging efforts of one Larry Malmberg, an elderly but energetic musician who clearly sees no boundaries in the repertoire of his instrument or any contradiction in the term “jazz accordion.” Name your decade, Larry played the jazz hits of the day, sometimes accompanied by an acoustic bass and sometimes on his own, it really didn’t matter because the accordion seemed to have all the notes, colors, and voicings of a big swing band or a modern bop quartet. Inevitably, someone requested “Squeeze Me.”

I have determined that the accordion is an instrument that defies analysis by the uninitiated listener or observer. That means I can’t figure out how it produces all those sounds simply by watching and listening. I think I need a dissection kit, an x-ray, or at least a hands-on version of Show and Tell. It would be easier if all accordions looked alike. They don’t. Some have keys like a vertical piano. Some have rows of buttons that look like sheets of those “dot” candies we used to get at the corner grocery in the 60s. Some have both keys and buttons. It seems that the two hands operate somewhat like those of a pianist, left hand comping and right hand zipping out the melody. But does it really work that way if there are only buttons and no keys?

Then there’s the bellows—clearly the compression and release of air allows the sound to soar and change direction, but is there any sound if the bellows are still?

Actually I find the design and décor of the accordion as interesting as its sounds. I remember the French accordionist who accompanied Dee Dee Bridgewater a year ago when she brought her Paris project to the Dakota. Simply, it was a beautiful object. It belonged in a museum with its intricate design.

In August I happened to be visiting a friend north of San Francisco when we learned that it was the weekend of the famed Cotati Accordion Festival. Cotati is a small town near Petaluma, a bigger town not far from even bigger Santa Rosa. Santa Rosa is known as the home of cartoonist Charles Schultz, and Petaluma is the home of the mythical Daisy Hill Puppy Farm, the birthplace of Snoopy. But Cotati—it’s the home of a mammoth accordion festival that draws a few thousand every year for a weekend of nonstop accordion gigs, instrument displays, and a large polka tent. Barbara and I decided it would be a fun way to spend an afternoon even though neither of us had any real knowledge or even much interest in the accordion per se. And it was fun—we heard 14 accordion enthusiasts join together to play “Lady of Spain.” There was a young man from (maybe) Vermont who made the polka sound halfway exciting, but was even more adept at the trumpet. And there was Tony something or other, apparently a very big name in the world of traditional accordion, who offered a set of Italian swing. The polka tent was the scene of action from morning til midnight but the two accordionists in that venue looked bored compared to the enthused dancers.

There were several displays of accordions—maybe hundreds of accordions. Red ones, white ones, black ones; accordions with fancy keys and colorful rows of buttons. Little boxes and large ones that looked impossible to support without straps and O rings.

It was the accordion’s answer to the Minnesota State Fair.
Photo: Two "Ladies of Spain" at the 2007 Cotati Accordion Festival (Andrea Canter, August 2007)
Posted by Canterjazz at 1:32 AM