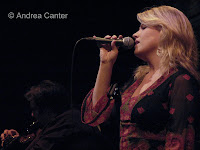 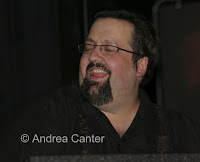 I never cared for jazz organ until the first time I heard Joey DeFrancesco live. Somehow that Hammond B-3 just made me thing of baseball stadiums. But Joey—he coaxed so many different sounds from that big brown box, from piantistic phrases to all-out moaning assaults to melodic smears that conjure horns. He never reaches bombastic and often delivers it “soft and mellow.” I try to get to his gig whenever he’s in town, which is usually once per year. We were lucky in 2007 as he was scheduled to play at the Winter Jazz Festival in St. Paul—the event that had to be cancelled at the last minute due to some catastrophe with the heating system in the temporary music tent. But jazz is about improvisation and the nearby Artists Quarter provided a venue for some of the musicians, including Joey and his trio. And they stayed in town long enough to come back to the AQ to perform with the Tuesday Night Band—our local organ trio.

Joey and his band were back at the Dakota over the past two days, and we were treated to the usual array of bop, ballads and blues, as well as a new young drummer (Carmen Intorres) who rearranged time like a seasoned veteran. Guitarist Jake Langley was again on the bandstand with his meticulous lines and energetic improvisations. And for two tunes each set, Joey’s fiancée Colleen McNabb grabbed the spotlight, presenting such lush melodies as “Don’t Go to Strangers” and “Waltz With Debbie” in a voice bronzed with glowing accents, a perfect accompaniment to Joey’s turn on the trumpet. But the biggest treat was not Joey’s organ or even his horn, but his own voice, down-in-the-delta bluesy on Ray Charles’ “I Got a Woman” on the first night and a crooning delight on the final set closer, “Nice and Easy.”

He’s a big man, but his talent is bigger still.
Above photos: (L) Colleen McNabb sings at the Dakota, (R) Joey DeFrancesco at the Artists Quarter in winter 2007. (Photos: Andrea Canter)
Posted by Canterjazz at 12:44 AM