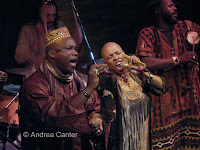 Dee Dee Bridgewater, who has transformed herself as a singer several times already, has claimed her African roots and in the process has affirmed her musical identity as one of the most dynamic, and honest, purveyors of modern jazz. Visit her website (www.deedeebridgewater.com/) and read her own account of her journey to find her ancestral home in Africa, identifying a rich legacy in the red earth of Mali. From this reconsideration of life and heritage, Dee Dee discovered within herself, and within the music and culture of her spiritual homeland, stories that begged to be told in the tradition of the “griots” – the storytellers. And who better to tell their stories than the incredible musicians she met in Mali? The resulting recording, Red Earth: A Malian Journey, as uplifting as it is, pales in comparison to the live performance that Dee Dee brings to American audiences through a limited tour this fall.

One stop on this tour was the Dakota. It’s not by chance that the Minneapolis club is one of very few venues of any size to host Dee Dee Bridgewater’s trio and the six Malian musicians that form the touring Red Earth ensemble. There’s mutual admiration among Dee Dee and Dakota co-owner Lowell Pickett, and as she mentioned several times during the closing set last night, the band was well fed by chef Jack Riebel. By the time I checked in for the late set on the second of the two-night gig, Dee Dee and company had just finished a 90+-minute opening set that was described as “amazing” by exiting patrons. Similarly her opening night sets had been labeled “incredible” by several who had returned for another dose. I had been listening to the new CD and thought I was prepared for the showcase of blazing new interpretations ("Afro Blue" was in fact the title track of her first recording 30 years ago) and original compositions.

Of course (usually) there is no comparison between live music and even the best recording. What distinguished the late set--besides the energy that sustained our rapt attention for nearly 2 ½ hours --was the communication between musicians and audience of a transcendent joy, a pure love of life and music that bridged class, culture, race, language and generations. Herself in the role of the village griot, Dee Dee told of her journey and self discovery in Mali, gave little lessons in the history of African music, and introduced us to the artists on stage who were performing for the first time in the U.S. Their instruments—the forerunner of the harp (the kora), the granddaddy of the xylophone (balofon), congas of all sizes―were as intriguing as their stories.

Dee Dee and I are the same “certain” age. I was exhausted after standing and clapping during the finale, a seismic uproar that enticed a line of the young and not so young to come up on stage to bump and whirl. Dee Dee was barely breaking a sweat after two long back-to-back sets of singing, dancing, and teaching. Maybe she slept on the flight to San Francisco where the next stop is the Herbst Theater.

As for me, I was too energized to sleep.
Above photo: Dee Dee Bridgewater celebrates Mali with "Griot" Kabiné Kouyaté, drummer Minino Garay and percussionist Baba Sissoko at the Dakota (Photo: Andrea Canter)
Posted by Canterjazz at 10:56 PM